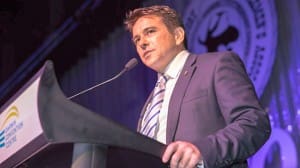 “The Northern Australia Development Office is open for business, providing a base for peak industry bodies to plan for the Territory of tomorrow,” Chief Minister Adam Giles said.
“Luke Bowen is the perfect person to head this effort with his extensive experience in the live cattle trade.

“As the head of the peak cattle industry body for the past five years, Mr Bowen has engaged with stakeholders who manage 90 per cent of the Territory herd, covering more than 45 per cent of the NT landmass.

“The Cattlemen’s Association has been strongly engaged in South East Asia and has driven a range of initiatives to expand cooperation and cultural exchange between northern Australia and Indonesia. Mr Bowen fully understands the needs of industries working in this space.

“He has a fundamental understanding of our wider region and is passionate about promoting regional economic development.”

In addition to sales and marketing roles, Mr Bowen spent 11 years with an Australian Government statutory authority working across the country on land management and pastoral development on Indigenous land.

“Northern Australia Development is crucial to securing prosperity for all Territorians through better transport links and the creation of real jobs for our children,” Mr Giles said.

“I’m proud we’re leading this national conversation about the possibilities for the North and Mr Bowen is the man to drive this effort.

“The Territory is already proving to Canberra and its fellow northern jurisdictions that it is serious about this push with a new public engagement campaign and this high profile appointment to our new office.

“Under Mr Bowen’s leadership we expect the Northern Australia Development Office to work with the Federal Government and industry groups to maximise the Territory’s opportunities, attract investment and capitalise on our natural assets, including our proximity to Asia.”

Mr Giles thanked senior Territory public servant Peter Carew, who was seconded from his role as Chief Executive Officer of the Department of Business to help establish the Office earlier this year.

“Mr Carew has a wealth of industry contacts and experience and was instrumental to establishing our office location and building partnerships within the Territory and beyond our borders,” Mr Giles said.

Mr Bowen will take up his new position July 7.

The Northern Australia Development Office is located in Development House on Darwin’s Esplanade.