ABC Rural’s popular weekly Landline program returns to TV screens for 2017 this Sunday, with a 90-minute special exploring the opportunities for Australian farmers in exporting beef, manufacturing, wool and wine to China.

Landline’s “Window on China” report, based partly on Toowoomba and Surat Basin Enterprise’s Access China trade mission to Shanghai held in October, will explore risks and rewards for Australian farmers and food manufacturers seeking to export.

ABC reporters Pip Courtney and Craig Zonca followed members of the delegation eager to learn what they could about how to do business in China. 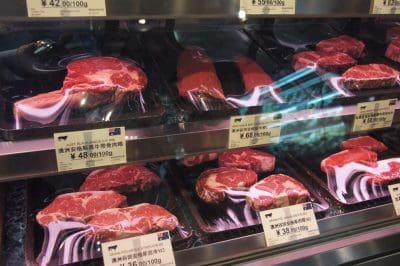 High-end, low-end: a retail display of Australian beef in an up-market Shanghai retail outlet, above, and below, a traditional wet market visited by ABC’s Pip Courtney and film crew during their Access China tour, at rear.

October’s trade mission blazed a number of trails, including the first international passenger flight out of Toowoomba’s new Wellcamp airport.

During one of the interviews, an Austrade representative says the opportunities are 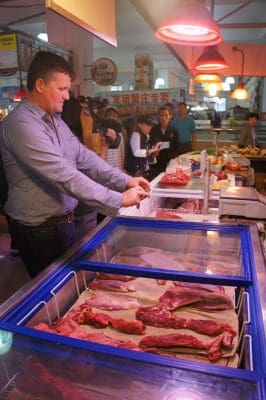 there for prospective Australian food product exporters, but warns that China’s a difficult market to crack.

“We tell them if they are coming to do business in China, to double the time they think it is going to take; double their budget; and halve their expectations,” an Austrade spokesman says.

The “Window to China” special suggests that Chinese consumers will pay top dollar for safe, imported food, and highlights the growing importance of e-commerce in the Chinese retail food market.

In another interview as part of the program, Elders China CEO Craig Aldous warns Australian farmers not be seduced by the hype about the opportunities in China.

The one-year-old Australia-China free trade agreement has raised hopes in rural Australia for a new era of prosperity, but it can cost more and take longer than people think, he says.

“Despite the hype and excitement you might read in the press back in Australia, the reality of doing business on the ground here in China is it’s a tough and competitive environment,” he said. “Simplistic views of doing business here simply don’t work.”

Chinese investment in Australian agriculture is usually a magnet for controversy, but one Chinese company has remained immune from criticism, with plans to invest $1 billion by the end of the decade.

Sunday’s season-opening program also profiles the Chinese New Hope Group, which has already invested $200 million in Australia’s beef and dairy industries, with plans to invest $1 billion in Australian agriculture by 2020.

In 2013 New Hope, China’s biggest private agribusiness, paid $100 million for a controlling stake in Queensland export beef abattoir Kilcoy Pastoral Co, and in 2015 it announced a $100m deal with two of the country’s biggest dairy farming families, the Moxeys and Perichs in New South Wales.