Kelpie sells for record $22,200 at Casterton 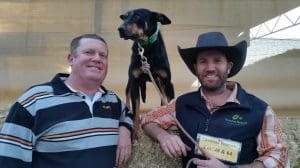 A 27 month-old Kelpie sold for a national auction record price of $22,200 at the Casterton Working Dog Auction on Sunday.

Glencairn Seven was sold by Victorian sheep property overseer Christian Peacock, with the winning bid made by Elders Hamilton stock agent Steven McLeod on behalf of an undisclosed Hamilton client.

Christian, 38, said Seven, was by his dog Pud’s Cruiser out of Dave Sweatman’s bitch Sunraysia Claire, and taken as the service fee for the litter.

“Richard Puddicombe knew that I had one of his pups and told Dave to take his bitch to me.

“There were seven pups in the litter and his tattoo’s number is seven.”

Both dogs’ prices easily surpassed the previous Australian working dog record of $14,000 paid for Shane Maurer’s Kelpie Coopendale Charlie at the Jerilderie Working Dog Auction in February this year. About 40 percent of the dogs sold at Casterton yesterday made $6000 or more, with Mr Tierney and LMB Linke auctioneer Bernie Grant selling before a big crowd at the town’s Island Park reserve.

Mr McLeod said he was impressed by Seven’s ability to work well without too many commands.

“He knew what he was out there to do; he certainly knew what his job was.”

He said Seven’s new owner wanted to remain anonymous, but would use the dog for sheep work and was not a Kelpie breeder. His client sent Mr McLeod to the auction after seeing Seven work in a Youtube clip.

Christian said he had a reserve of $5000 on Seven before the auction and couldn’t believe bidding continued to $22,200.

“When he got to $10,000 I thought jeez this is a nice bonus, I was quite chuffed with that, and then when he got to Ian O’Connell’s price I thought ‘crikey – that’s going up with some big names there’.

It was Christian’s first year demonstrating a dog personally at the Casterton auction and he said he wanted to bring a good one.

“I wanted to bring the best one I could without affecting my team.”

He described Seven as a strong dog, able to back and bark on command, and muster small or large mobs in the paddock.

“He’s a good solid station dog — just a practical worker – and that’s what I like to have.

“They’ve got to be an all-rounder and they are hard to get, and he was one of those,” he said.

“He’s a good honest mustering dog – he could bring into the yards over rocks, tussock, whatever and through the yards and back out.”

‘Less is more’ in commands to bring out natural ability

Christian has been working with dogs since before he left school. His livestock experience includes work in Canada and Sweden. He has been working at the Bain’s St Enochs property for five years, managing 8500 Merino, crossbred and Coopworth sheep. In his early days working stock, Christian said he would take on difficult dogs others considered worthless “just so I could learn,” but now pays more attention to bloodlines and natural working ability. “Less is more” when it comes to commands, he said.

“I don’t like them to be robotic; they’ve got to be able work for themselves.

“I used to work in the hills and once the dog went over the hill, it had to work on its own,” he said.

“You look for the good bloodlines and you spend the time with them, and that’s the big thing.

“It’s good for all the stockmen, and I do know a lot of good stockmen who have some pretty handy dogs and I just hope they can do the same.”

Young stockmen and women can be rewarded

Mr O’Connell said the auction result today showed that if young jackeroos and jillaroos took the time to train a dog properly they will be rewarded for their efforts.

“It’s a great incentive for young men and women working on the land to train their station dogs up well with positive methods, bring them here and send them out to the world.”

Up to now Christian said he had bred two litters a year ‘’at the most” to renew his dog team for work at the Stockyard Hill sheep property of David and Deb Bain. He has sold a few dogs privately for up to $4500 and competed in a few trials.

Christian also sold a three month-old bitch pup Sadie at Casterton for $2000 — well above his $800 reserve – and already knows where his sale proceeds will be going. He and his wife Katie – with two young children – have some renovations to do on the family home at Waterloo, 145 kilometres west of Melbourne.

“We’ve got a pretty cold house that needs to be insulated and a new kitchen – so the money means a lot; it’s going to help out a lot.”

Karatta Pastoral Co manager at Naracoorte, Jamie Partridge said the most he had previously paid for a good working dog was $8000.

“But the value of a good working dog is a lot more than that.”

He said the Naracoorte operation could run from 5000-15,000 sheep during the year.

“So their (dog’s) value to us is huge – they allow us to save a couple of labour units.”