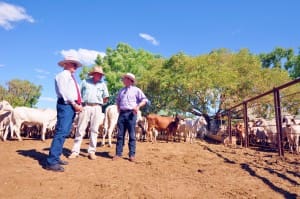 Representing Federal and State electorates in north western Queensland that are among the worst drought affected regions in Australia, Bob and Rob Katter have teamed up with broadcaster Alan Jones to draw national attention to the plight of producers affected by drought and heavy rural debt burdens across Australia’s agricultural sector.

Bob Katter, the Federal Member for Kennedy and his son Rob Katter, the Queensland Member for Mount Isa, have organised a rural debt crisis summit to be held in Winton on Friday, December 5.
Mr Jones from Radio 2GB will be the guest speaker.
Rob Katter said the forum aims to pull together beleaguered graziers, local agribusiness bankers, small business owners, politicians and with invites out to the big banks and the Australian Banking Association
The current situation was a a crunch point for the agricultural sector, not only in Queensland, but the whole country, he said.
“What is needed and what we’ve been calling for is a complete restructuring of agricultural debt,” Mr Katter said.
“Spiralling agricultural debt was a problem before Labor’s Live Export Ban, before the drought and it needs a systemic solution such as the Australia Reconstruction Development Board.
“There’s no doubt there are scores of grazing families in financial distress at the moment, and the combined cultural, economic, social and environmental impact of doing nothing further is difficult to comprehend.”
Mr Katter said he was calling on both State and Federal Governments to commit to some of the solutions out there for graziers who were on the verge of bankruptcy.