Australian agriculture is leading the way on emissions reduction, but deep emissions cuts in transport and energy are needed to protect farming and food security in future.

In the wake of the release of the IPCC’s sixth assessment report this morning, Farmers for Climate Action has called on the federal government to “step up its game” on emissions reductions and protect Australian farming families. 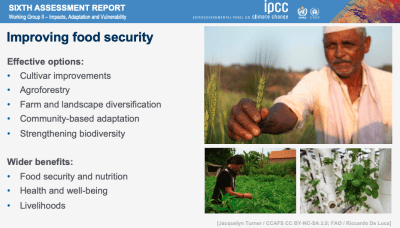 A screenshot from an IPCC report presentation offering tips on improving food security.

In the Climate Change 2022: Impacts, Adaptation and Vulnerability report released today, IPCC scientists determine that some impacts are already “irreversible” and that the world is not reducing greenhouse gas emissions fast enough.

Australian agriculture operates in one of the most variable rainfall zones in the world.

The FCA says that this morning’s IPCC report projects impacts this decade including a drop in wheat yields by up to 30 per cent in south-west Australia, lower milk production and lower livestock reproduction as a result of extreme weather events.

“Regional Australia has so much to gain from emissions reduction. It will not only protect our farmers and our food supplies, but we can create tens of thousands of regional jobs in green hydrogen and renewable power generation.”

“Hot days, more heatwaves and less rain through cool seasons in the south-west and south-east of the continent will mean more heat stress for livestock and reduced grass growth.

“Ultimately this will mean Australia produces less red meat and less of the country will be suitable for growing crops.”

Farmers for Climate Action CEO Fiona Davis said the group is “a movement” of 7000 farmers and agricultural leaders working to ensure that farmers, who are on the frontlines of climate change, are part of its solution.

These impacts are exposing millions of people to food insecurity and malnutrition and causing losses in a range of sectors including agriculture.

One section of the report advocates the use of livestock feeds developed from insect protein sources, stating that insects are generally rich in protein and can be a significant source of vitamins and minerals. Black soldier fly, yellow mealworm and 6 the common housefly had been identified for potential use in feed products in the EU, for example.

“Replacing land-based crops in livestock diets with some proportion of insect-derived protein may reduce the GHG emissions associated with livestock production, though these and other potential effects have not yet been quantified.”

The full IPCC report can be viewed and downloaded here