“We are delighted that the Senate References Committee are on the same page as us when it comes to an industry transformation agenda,” RMAC independent chair, Don Mackay, said in a statement released by RMAC today.

“It’s great to see some parts of the Parliamentary process addressing the priorities identified in the RMAC Feeding Our People 2017 through the recommendation of an establishment of a Task Force to drive an industry transformation agenda and review of the Red Meat MOU.”

“Given this strong alignment, we are perplexed by RRAT’s view that ‘the committee is not satisfied that RMAC has demonstrated sufficient improvement in terms of efficacy or accountability over the past two years.’”

“Together with our partners, RMAC has – amongst other things – worked tirelessly on trade reforms for Japan, Korea and China which will return up to 20 billion dollars in value by 2020, launched the Australian Beef Sustainability Framework which aims to defend and promote our industry against a 6 billion dollar risk and provided advice to key Turnbull-Joyce government initiatives including the Foreign Policy White Paper and the National Freight and Supply Chain Strategy.”

“RMAC takes our responsibility on behalf the Australian red meat and livestock businesses we serve seriously and aspires to provide the highest quality policy leadership to decision makers. We will continue to do this with the mandate from our members.”

“We call on key members of the Cabinet to continue to work with us to achieve other outcomes in Feeding Our People 2017 and to work together to unlock up to 7 billion in growth for Australian red meat and livestock businesses.”

Background information: Published in early 2017, RMAC’s Feeding Our People 2017 seeks as a key priority ‘Optimised Statutory Business Functions’ (pg. 5) which seeks to foster a professional industry with optimised resources to deliver progressive policy development, research and marketing for the Australian red meat and livestock sector. This includes key actions of:

The levy funded industry service provider Meat & Livestock Australia came in for some criticism in last night’s report, with Senators suggesting MLA had been trying to influence industry decisions on mandatory price reporting, and was leading the industry towards the rapid adoption of DEXA technology without evidence of adequate consultation with levy payers. 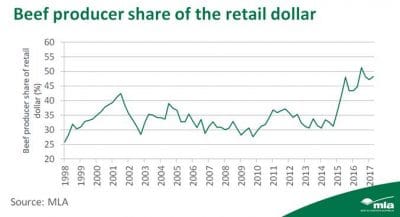 MLA charts sent to the ACCC outlining that to move to full price transparency and mandatory price reporting MLA would need to be given the powers to acquire the information – or those in the supply chain would have to be legislatively compelled to provide MLA with the information. At present MLA says it is reliant on information being voluntarily supplied to it and its own reporting service in the saleyards. Click on charts to enlarge 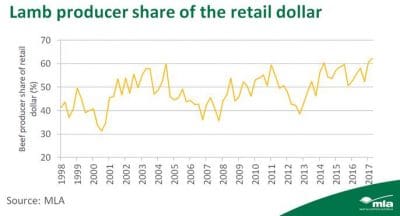 A somewhat perplexed MLA MD Richard Norton told Beef Central today that he felt the report contradicted the earlier beef and cattle market study report by the ACCC, which had praised MLA for the role it had played in moving toward Objective Carcase Measurement and in making prices more transparent.

He said MLA would not apologise for working to implement the goals of the Meat Industry Strategic Plan 2020 which included moving to value based marketing, which gives a fairer outcome for red meat producers in the marketing of their product.

“Not to have pushed DEXA through a fast implementation process with industry, would be endorsing the status quo,” Mr Norton said.

“And when I have spoken to some 20,000 levy payers, not one of them wanted the status quo.

“So I can’t on behalf of MLA apologise for fast-tracking DEXA which will give producers transparency when selling product over the hooks.”

Mr Norton said that if Senators wanted true price transparency in the beef industry, it was up to them to recommend the Government legislate to give groups like MLA the power to enact it.

“If it wants mandatory price reporting, I will need producers who sell on a daily basis to give MLA their private sale agreements or any transactions they make on a daily basis.

“I will need every grid from every processor on a daily basis, and I will need every retailer domestically and globally to give me the SKU by retail price, and even then I think I will have about 60pc of the industry covered.

Mr Norton said he felt Senator’ criticisms that industry had not been acting quickly enough to prove price transparency issues did not recognise the work MLA has done.

“You can now compare saleyards with saleyards by categories, by kilo weight ranges and compare that to Over the Hooks,” he said.

“The ACCC acknowledged that in their final report.

“The ACCC also acknowledged how much work MLA had done around Objective Carcase Measurement.

“And this report is a contradiction of all that, saying MLA has had too much influence on industry objective carcase measures

“The ACCC congratulated us for the work we had done on OCM and the work we put into making prices more transparent, and now we get accused of influencing outcomes of both.”

Cattle Council of Australia provided the following statement in response to the Senate committee report:

“Cattle Council of Australia (CCA) are disappointed that the Senate recommended removing the Cattle Council’s status as the recognised representative body.  The recommendation is a long reach from what the Inquiry was set up to investigate.  Following the 2015 Senate Inquiry into “Industry Structures and Systems governing levies on grassfed cattle” CCA has demonstrated strong commitment to improving representative structures and increasing transparency.  The CCA Board already includes two independent skills based Director’s with scope to increase the number in line with increased direct membership numbers.

“CCA has access to over 200 beef producers from around Australia all whom volunteer their time to regularly meet and work hard to ensure the prosperity of the beef industry through CCA’s consultation frame work. CCA continue to develop and support MSA which adds over $100m to the beef industry each year.

“CCA continues to deliver on behalf of industry and have achieved three FTA’s with outstanding outcomes for the beef industry, delivered Grassfed assurance products  and developed on farm Livestock Production Assurance systems that guarantee the safety of beef to our 100 export destinations.

“Leadership is about making the hard decisions and not populist decisions, and whilst not everyone agrees with CCA the Australian beef industry has a global reputation for safety and quality.”

AMIC has provided the following statement in response to the senate committee report:

AMIC provided evidence on numerous occasions as well accompanying deputy chair of the committee Senator Barry O’Sullivan on a “fact finding” mission within Queensland, as well as participating in committee visits to technology providers, and provided both a submission, and answers to questions on notice during the more than two years of the inquiry. Whilst AMIC is satisfied to support most of the recommendations from the report, AMIC questions the overall value that has been achieved for the money spent.

AMIC Chairman, Lachie Hart, whilst attending fact finding missions with the committee, still questions the “singling out” of one part of the supply chain within the report. “From the outset AMIC has, and continues to, support a proactive and sustainable grass fed producer group, and we support, as an industry, any recommendations to enhance this” said Mr Hart “Whilst the red meat processing industry has been continually used as a focal point within this, the outputs to assist all of the supply chain from this report seem limited.” said Mr Hart. “What the red meat industry needs is government assistance to deliver a sustainable and profitable supply chain for the benefit of all stakeholders. We need governments to be focussing on key sustainability issues including better energy policies, improved infrastructure and assistance with increase market access to enhance the marketing opportunities of our products at both retail and export markets.”

AMIC CEO Patrick Hutchinson said AMIC will be working with its industry stakeholders as they progress through a number of the recommendations. “AMIC will work with industry to develop outcomes surrounding recommendations 6 and 7 (Review of Industry MoU)” said Mr Hutchinson. “Further, AMIC and its members will assist the Department of Agriculture and Water Resources (DAWR) with fact based information regarding Recommendation 1 (pre and post-sale weighing research)”.

AMIC continues to support AUS-MEAT as the lead agency for calibration and auditing within the OCM program “AMIC is on evidence stating this support for AUS-MEAT, as is MLA and AMPC. AMIC does not see value in another review of AUS-MEAT when there is major support for their involvement” stated Mr Hutchinson.

AMIC continues to support the current structures in place for dispute resolution within livestock marketing, no matter what channel. “Any additional red tape imposed by the government (through whatever means) goes against their rhetoric on red tape reduction within industry” stated Mr Hutchinson. In a recent review by AMIC on MLA reported saleyards (16/17), cattle under the grass fed and dairy categories (mainly bought by processors) represented 36% of sales. Cattle bought by re-stockers and feeders (mainly bought by producers/lot feeders) represented 40%. “Therefore AMIC asks again value in Recommendation 2 of this report, as it is clear this is an outcome directed at assisting producers, yet it in fact will impact on them” said Mr Hutchinson. “Any outcome in the area of livestock marketing once again needs to be beneficial for the whole livestock chain”.