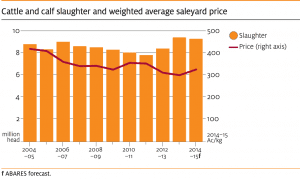 Despite expectations that cattle slaughter rates will remain high into 2015, ABARES believes saleyard prices will be pushed higher on the back of ongoing strong export demand.

The Government commodity forecaster expects average saleyard cattle prices to increase by 12pc in 2014-15 to 328c/kilogram.

This is largely contingent, however, on an improvement in seasonal conditions towards the middle of next year.

Strong demand conditions helped to push the weighted average saleyard price in Australia to 347c/kg in September, the highest monthly average since December 2011.

The price has since eased though in response to ongoing drought conditions and high slaughter rates. 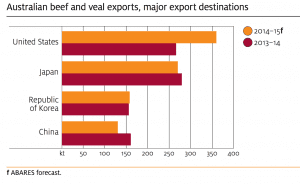 If conditions improve towards mid-2015, the commencement of herd rebuilding will increase demand for restocker cattle. Combined with high export demand, this would place upward pressure on saleyard prices.

Key messages from ABARES’s December 2014 commodity outlook for beef and veal, released this morning, include: