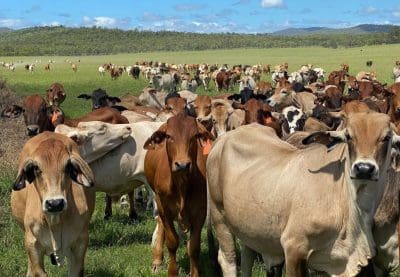 The high price of Australian cattle helped to bolster MLA revenues despite lower herd numbers and slaughter ratees in 2020-21.

The levy-funded red meat research, marketing and extension provider saw overall revenue drop by only 3.6 percent to $260 million for the financial year, according to MLA’s 2020-21 annual report.

A low national slaughter rate, combined with the impact of improved seasonal conditions and herd and flock rebuilding on cattle and sheep transaction rates, saw overall levy income for MLA decrease in 2020-21 by $13.2 million, or 11.5 percent, to $101.2 million.

Although overall levy income was well down for the year, another factor played a role in limiting overall revenue – the record price levels for Australian cattle.

A large component of MLA’s revenue comes from matched Government dollars for research and development.

These are driven by the gross value of production, which keeps going up, as MLA managing director Jason Strong explained to Kerry Lonergan in a recent interview for The Weekly Grill podcast. Government contributions of $85.7 million increased by $7.2 million or 9.2 percent during the period, which is primarily attributable to eligible Government matching contributions applied to the uplift in R&D investment, the annual report noted.

“Even though we have lower herd and flock numbers, so the actual levy income is down considerably, the matching dollars coming from the Government continue to go up as the value of the industry continues to stay up as well with increased prices, so there is a bit of a trade off,” Mr Strong explained.

“And the other thing we are doing is using reserves to keep our budget consistent, which is, while we have got them, and that is allowing us to maintain the same level of spend as we have got a lower levy income.”

That was reflected in retained earnings which were down 20.5 percent for the year to $87.5 million, according to the annual report.

Overall MLA’s expenditure for the year lifted by 3.2 percent to $282.5 million.

Employee numbers during the year reduced by three to 279, while the number of MLA members decreased by 0.6 percent to 49,302 members.

The Annual Report is on the MLA website here