Kris Swers aka “the badger” and Ralph Barnett at the Mount Isa Rodeo where they have been working the crowd for years. Photo: Shank Brothers Facebook

AS CROWDS gathered to watch one of the biggest rodeo spectacles in the country, an energetic and smoky smelling side show was entertaining the punters taking a break from the action in the arena.

It was the 2021 Mount Isa Rodeo and the Shank Brothers, Ralph Barnett and Kris Swers aka “the badger”, were armed with a giant smoker, a big pile of gidgee wood and a set of cranked up speakers, which they used to divulge some of their best tips.

The pair were barely able to catch their breath the entire weekend as the COVID-inspired smoker craze was well underway and they were answering question after question.

One-year-on and demand for the Shank Brothers’ services at big events remains high, with a growing percentage of food vendors serving smoked meat and attentive crowds hoping to hone their skills.

“Smoking meat becomes a sport, it’s very addictive and I think that is why there is so much interest in our shows at these events,” Mr Barnett said.

“It is devastating to spend hundreds-of-dollars on a piece of meat and hours cooking it to end up with a bad result. You only have to do that once and you never want to do it again and I think that is why we have people coming to our shows to increase their knowledge.” 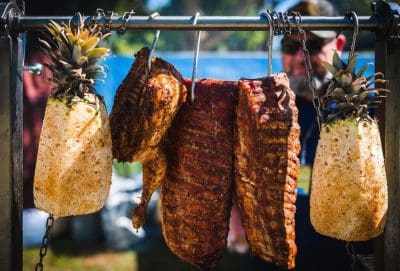 Mr Barnett and the badger started the Shank Brothers’ shows after spending some time on the barbecue competition circuit. Having performed at shows across the country, he said festival food was really starting to improve and smoked meat was a big part of it. At this year’s Byron Bay Bluesfest, with a crowd of more than 50,000, the Texas BBQ food outlets were the most popular on the entire site.

“We always look at smoked meat as a real treat for people and we have noticed through the food vendors at these shows that people will pay for it,” he said.

“I remember seeing a whole cooked tomahawk steak with some chimichurri sauce for $160 and thought they might struggle to sell those – they ended up selling 140 across the day.”

The Shank Brothers have worked with some well-known beef brands over the years to promote their product through cooking shows, including Tasmanian-based Cape Grim. Mr Barnett said the combination of entertainment and taste was a way of adding more value to a billboard.

“We normally try and partner with beef brands who are local to the event where we are performing,” he said.

“When we partner with beef brands we learn a lot about the intricacies of particular products. We have been through processing plants, out to some remote Wagyu properties and we’ve cooked Brahman hump up in Rockhampton.

“We find that the knowledge producers have of their product is always a drawcard at our shows. Most people know there’s grainfed and grassfed, but intricacies only start there”

Mr Barnett said butchers had cottoned on to the smoker craze and were using it as a point of difference.

“I think demand for low and slow cuts of meat has really pushed butchers to change what they are doing,” he said.

“You walk into a butcher today and they have the spice rub, the wood-chip, the cuts and pretty much everything else you need except the smoker.”

Per kg the price of brisket ranges between $19 and $29, according a recent fathers day promotion at Wright’s butchers in Sydney. Other cuts favoured by “low and slow” cooks, like tomahawks, are a little more expensive – with the same promotion offering grass fed marble score 4 tomahawks for $46.50/kg.

The cost of smoking equipment has a wide range, with a quick search of bbq retailers finding they start about $70 and can go up to more than $4,500.

Is smoking here to stay?

Earlier this year on a Beef Central trip to the Houston Livestock Show and Rodeo, a group of marketing experts were talking about the rise of the bbq in the United States.

Smoking meat has been prevalent in parts of the US for decades, but the group said it was only the early 2000s when the trend started to grow and they industry was wondering whether it would die off.

But it has done the opposite in the US with a constant bbq competition tour, some of them handing out more than US$100,000 in prize money and celebrities keen to show off the practice. Facebook founder Mark Zuckerberg also famously made one of the early live videos on his website while “smoking a brisket”.

Mr Barnett said the bbq tour is starting to heat up in Australia.

“It has exploded in recent years. It has gone from humble beginnings to a fiercely competitive environment with hundreds of teams and thousands-of-dollars in prize money,” he said.

“You are also seeing people pouring a large part of their life savings into smokers.”

Mr Barnett said the US bbq industry has started to invest into the growing practice in Australia.

“We have partnered with some spice rub brands and pitmaster brands from the US who are trying to cement a presence in Australia,” he said.

“They have decades more experience when it comes to their products and they want to work with us to develop their brands in Australia.”