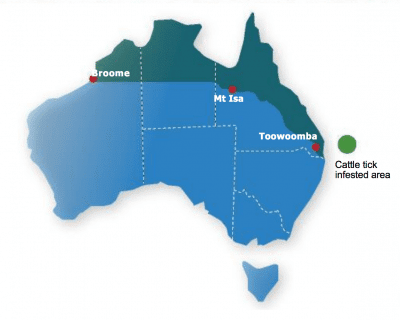 A new industry group has been formed as part of the review of the cattle tick line in Queensland.

“Dr Crook will be supported by representatives from Queensland Dairyfarmers’ Organisation, Australian Livestock and Property Agents, Animal Health Australia, two independent cattle industry members and members from AgForce – one from the infested zone and one from the free zone.

“Being able to draw on the knowledge and experience of the working group members will be crucial for the cattle tick line review process including guidance on its implementation.”

Mr Furner, visiting Taroom to discuss tick and other issues with industry stakeholders, said the working group was formed following a series of consultation workshops conducted by Biosecurity Queensland and AgForce in 2018.

“It was apparent from those meetings that industry members had very clear views and opinions on the location of the cattle tick line, and the cattle tick management framework,” Mr Furner said.

“Forming the group is another example the Palaszczuk Government’s collaborative approach to managing biosecurity issues with industry.

“A key aspect of the working group will be the consideration of an ongoing review process, driven by producers, for the future management of the cattle tick line.”

Mr Furner said the current cattle tick line arrangements were established following the introduction of the Biosecurity Act 2014 on 1 July 2016.

“It also has much stronger requirements for eradication of cattle tick infestations in the free zone.

“As we approach three seasons under the new framework, it is timely to consider the effectiveness of eradication campaigns and assess the positioning and sustainability of the tick line.”