ABS data shows that in the first quarter this year, cattle from grainfed programs made up more than half of all beef production for the first time, while 51pc of domestically-consumed beef came from feedlots.

The previous record for grainfed beef production was achieved in the first quarter last year, when 49.2pc of all beef produced was from feedlots.

These calculations showed the strength of the grainfed sector, and its ability to provide continuity of supply for processors during a period of constrained cattle supply, Meat & Livestock Australia said.

The statistic that more than 50pc of domestically-consumed beef is for the first time from feedlots also reflects that domestic brands and quality assurance programs are grain finishing cattle, for consistency purposes. Last quarter, some 19pc of cattle on feed were on feed for less than 100 days, typically destined for the domestic market.

Providing further evidence of the impact that grainfeeding is having on the production mix this year are MLA statistics released last week on average carcase weights, now at all-time records.

Another contributing factor is the consistent improvement in cattle genetics and gains in the lotfeeding sector that have continuously driven cattle weights higher, MLA commentary suggested. 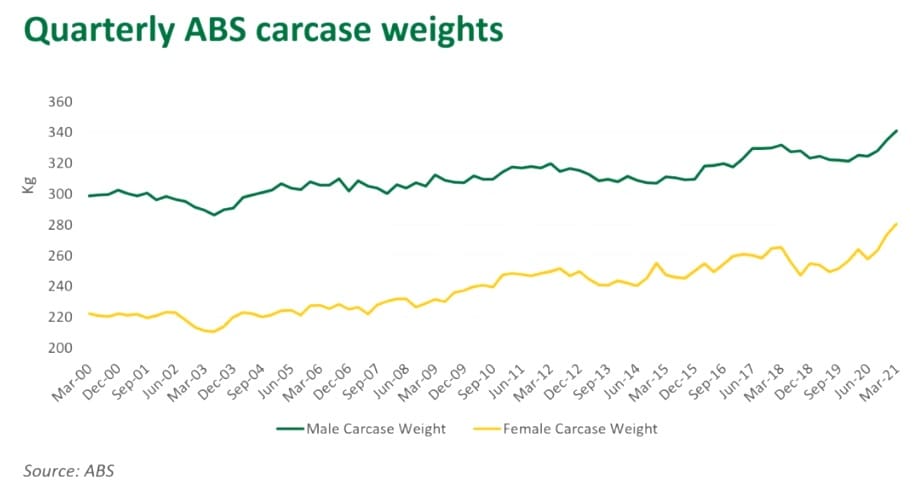 The year-on-year change suggests heightened fluctuations in male to female weight gaps in the last five years, furthered by significant shifts from wet seasons to drought and back again.

Number of factors in play 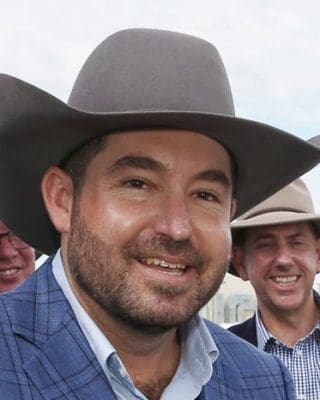 Australian Lot Feeders Association president Bryce Camm said a number of factors were in play during the March quarter that helped deliver the 50pc market share milestone for grainfed beef.

“Firstly, overall cattle turnoff is obviously down – and especially for (non-fed) cow kill. That has tended to push the proportion in favour of the grainfed side,” Mr Camm said.

“The first quarter does not traditionally produce the volume of grassfed slaughter cattle seen later in the year, so there is also a bit of seasonal factor there. And the whole production system has slowed down as the industry works through its rebuilding phase, so naturally, those cattle going in to feedlots are going to rise, as a proportion of overall kills.”

Another factor was the heavier carcase weights in grainfed cattle, he said.

While the number of grainfed cattle processed last quarter was only 47 percent, the relatively higher carcase weight than grassfed animals resulted in total production topping 50pc for the first time, Mr Camm said.

And the trend, over time, still indicated that grainfed production will continue to grow, he said. That was reflected in the increasing feedlot capacity evident over the past few years, as stakeholders continued to invest in feedlot infrastructure.

“Capacity growth in the industry tends to accelerate at some times, and then slows down a little – but we know that the longer trend over the past 15 years has been one of steady growth.”

Asked whether the statistics suggested Australia was starting to drift more towards a US-style grainfed-dominant production model, Mr Camm said while Australia was still a long way from that, there was no doubt that grainfed beef was growing.

“I hate getting into a ‘grass versus grain’ debate, because the industries are so intrinsically tied together,” he said. “The wider story is that there is an increasing demand around the world for high quality Australian beef – and both grass and grain have a part to play in that.”

While there was an underlying trend among some consumers towards ‘natural’ and ‘grassfed’ products, quality and consistency continued to outweigh those points, in consumers’ minds.

“And that’s the role the grainfed sector plays. With the high price of young cattle today, everyone wants to drive efficiencies and grow cattle more quickly, and that, I think, is the other driver that will continue to happen in this.”

“We know we get variable seasonal conditions across this country. When the buffel grass is great, people tend to leave them in the paddock as long as they can. But we all know there is a point in the year when that stops, and that’s when feedlot systems come into their own.”

“I just don’t think the idea of leaving bullocks on a place in the channels for a couple of years to fatten has much appeal any more – not when that animal might be worth $2500 or $3000 – there’s a lot of capital tied up.”

Certainly, several recent conversations Beef Central has had with large certified grassfed supply chain managers suggested they have some concerns about grassfed supply later this year – especially heading into spring – given the proportion of available young cattle now heading into feedlots.

Mr Camm said for a cattle breeder, the option of selling a feeder steer at around $2000 a head remained ‘very attractive.’

“It wasn’t that long ago that that was the priced for a finished export bullock,” he said. “A lot of people are obviously keen to cash in that year earlier, and take that option.”

Heavy feeders in the market in Queensland this week are showing anywhere from 425-440c/kg for flatback steers.

The other big shift in the market that was influencing the proportion of grainfed production was been the number of feeder cattle now destined for commercial grainfed brand programs, rather than being produced simply as ‘commodity’ grainfed beef.

“All of the big players are now differentiating more grainfed cattle under commercial brands, extracting greater value out of the product. There are so many non-packer exporters now also playing in that space. There are relatively few cattle now going onto feed that do not already have a home at the other end,” Mr Camm said.

While cattle numbers were tight, as they currently are, the simple economics encouraged lotfeeders to ‘keep feeder cattle longer, and make them heavier,’ he said.

Some ‘100-day’ cattle currently being processed had probably had 130 days or more on feed, but working against that, backgrounders were also keen to add as much weight as possible to feeders before they sold them, to maximise their return.

“In our business’s case, most of the feeders are now very heavy, because it’s in the backgrounder’s best interests – and  they have the season to do it,” he said.

“All of a sudden this year I’m buying a 480-500kg feeder steer – much heavier than they have been for the past two or three years, because those lighter steers sub-380kg are very expensive, on a c/kg basis.”

“That in itself is contributing to heavier carcase weights this year.”

Asked how much impact the Wagyu sector was having on recent grain/grassfed production statistics – both in terms of average carcase weights and proportion of grainfed turnoff, Mr Camm said undoubtedly it was a factor.

The volume of Wagyu cattle now on feed was definitely having an influence right across the beef production space. But how much it is individually driving carcase weights was difficult to determine, and something for a ‘bigger conversation,’ he said

Fuelling the confidence in the feedlot sector – being expressed in new pen construction and capacity expansion, was the underlying confidence in beef trade prospects across the world.

MLA’s commentary yesterday said that going forward, production trends towards grainfed indicated that the Australian grainfed sector will continue to make up a growing percentage of cattle slaughter and beef production.

“The sector will also continue to offer processors continuity of consistent supply, painting a positive picture for the future of grainfed cattle in Australia,” MLA’s commentary said.