A coal seam gas well in a grazing paddock

CLAIMS that insurance coverage issues for Queensland landholders with gas wells and associated infrastructure on their land have been resolved under a new agreement have been rejected by affected property owners, who say the risks of ‘post-gas’ liability issues remain far from settled.

The GasFields Commission of Queensland (GFCQ), which last week announced a new agreement designed to restore insurance coverage for farmers with gas wells currently operating on their properties, has acknowledged in response to landholder concerns that the post gas landholder liability issue is yet to be resolved and work continues to find a solution.

The issue stems from news last year that major insurer IAG, whose subsidiaries include large rural insurance providers WFI and CGU, had withdrawn public liability coverage for farmers with Coal Seam Gas (CSG) operations or infrastructure on their properties.

IAG confirmed at the time  that its public liability and farm business insurance policies would not cover land and water contamination, or the risk of farmers losing industry accreditation in the event of a spill, or gas infrastructure failure.

After months of uncertainty the Gas Fields Commission of Queensland issued a media statement last week announcing an agreement had been reached on a new indemnity clause for insurance policies which assured ongoing farm public liability coverage in Queensland. The new clause can be viewed online here

However, affected landholders said the GFCQ’s announcement created a misleading perception that the entire issue was resolved, when the post-gas liabillity issue is yet to be settled. 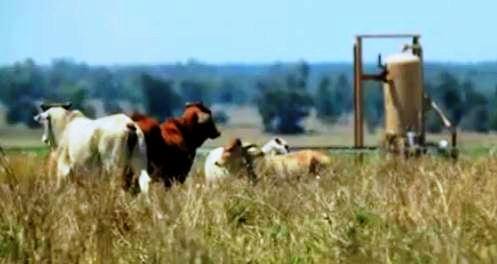 Farmers remain “completely exposed” and not covered by from any liability arising from gas infrastructure left on or under their land after a gas company has officially ceased operating on their land, the group says.

Landholder and member of the Surat Stakeholder Advisory Group, Zena Ronnfeldt, said the lack of insurance coverage for farmers with gas infrastructure on their land under a ‘post-gas’  scenario had the potential to shut down the agriculture sector when the CSG industry ends.

The group said the GFCQ statement falsely instilled confidence for landholders to sign a conduct and compensation agreement (CCA) while there was still no answer to the post CSG public insurance liability issue.

“GFCQ have grossly underestimated the enormity of this issue,” the group said in a statement.

“Contrary to what GFCQ claim, the new indemnity clause does NOT provide greater clarity for landholders where farming and gas infrastructure coexists.

“Talks with peak organisations may well be occurring but until a solution is in place, landholders should not be forced into signing a CCA. It is not adequate to say they all are working on a post CSG activity solution.”

The group said talks with two banks recently confirmed that farmer loan borrowing conditions were voided if they no longer have adequate public liability insurance, the group said.

“The situation has not changed. Farms with any remaining CSG infrastructure, once the CSG industry comes to a close and tenements have been returned to the government, are uninsurable.

“Land liaison personnel are telling landholders that post CSG activity, the lack of public liability insurance for residual CSG infrastructure and I quote “is not their problem.”

“It certainly is the CSG industry’s problem. Landholders are well within their rights to refuse to sign any CCA forcing them into an untenable position that then allows banks to foreclose on loans.”

The group says resource companies need to remain responsible indefinitely for the infrastructure they leave behind.

“50, 100 or 200 years down the track, someone has to be responsible for failing infrastructure that insurance companies have viewed as being too risky to cover.”

“This issue is not easily solved, and a possible solution might be a national CSG levy to fund the CSG industry’s long-term liability.”

In response to landholder concerns the GFCQ issued a statement to Beef Central saying the new public indemnity clause took 10 months of intense negotiations to achieve and can now be used to ensure ongoing farm public liability coverage in Queensland while gas operations remain active.

However, it acknowledged that the issue of ‘post-gas activity’ is yet to be resolved and the subject of ongoing discussions.

“Whilst there are a range of existing regulatory frameworks regarding long term liability that specifically relate to environmental remediation and safety, there are elements of these frameworks that require further clarification in relation to protections afforded to landholders.

“Importantly, all members of the Commission’s working group have agreed to continue to work together on examining landholder’s public liability insurance in areas of ‘post-gas activity’ until clarification for landholders has been delivered. As the Commission is currently working through this very complex issue it is not yet possible to suggest a solution without first having clearly defined and clarified the issue and potential options available.”

The GFCQ’s full statement can be viewed online here.