An online fundraising platform has been established for the young father who survived the horrific shooting near Bogie between Bowen and Collinsville last week, in which his mother, brother and step father where shot dead on the boundary of their remote property.

Ross Tighe (left) was allegedly shot in the stomach and managed to escape in a ute before alerting police to the shootings.

He has since undergone emergency surgery at Mackay Base hospital where he remains in a stable condition.

Police allege neighbour Darryl Young (below right), 56, opened fire on Mr Tighe, his brother Graham and mother Maree Schwarz and step father Merv Schwarz at the gate of his property on Shannonvale Road at 8:30am last Thursday, where they had gathered in a pre-arranged meeting to discuss a dispute over property boundaries. 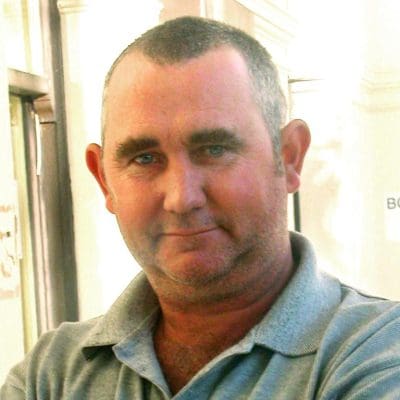 Mr Young appeared in Proserpine Magistrates Court this morning via video link charged with three counts of murder and one of attempted murder.

He will remain in custody after his matter was adjourned.

He is due to appear in Bowen Magistrates Court on November 1.

A GoFundMe page has been organised for Ross and his partner, Kaitlyn, to help with their family’s recovery.

“On the 4th of August 2022 the Tighe family suffered a horrific tragedy. As some may be aware through news articles 3 family members have tragically lost their lives in Bogie, leaving Ross a sole survivor of this heinous crime,” the GoFundMe page states.

“This tragedy will have forever changed the lives of Ross and his partner Kaity and their young daughter.

“We have created this fund to help them with the aftermath of suddenly having their worlds turned upside down.

“Please help us lessen some of this burden and unforeseen future costs.”