‘From bare ground to the best season we could hope for’

CATTLE producers in western Queensland and the channel country are rejoicing in a dramatic seasonal turnaround that has transformed their outlook in a handful of weeks.

A month or so ago most producers were still feeding hay or cutting mulga where permitted to keep cattle alive. 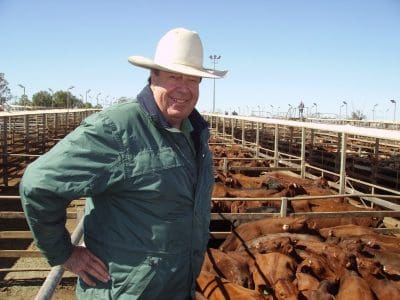 Rod Turner at the Roma saleyards

Most properties from Roma west to the channel country had now had a drink and cattle were standing in “two to three foot of buffel,” Roma livestock agent Rod Turner from Nutrien Ag Solutions told Beef Central this morning.

“It is looking very good and very positive,” he said.

“We are assured of winter feed now.

“We’ve gone from bare ground to the best season we could ever hope for.”

Tony Lilburne from Grant Daniel Long said an area from Quilpie to Thargomindah also received its first big rain of the season in the past week.

Footage of floodwaters being widely circulated on social media are showing the first significant flows in western river systems like the Bulloo for more than eight years.

In the Maranoa and Western Downs the rain has created a shortage of oats seed and pushed prices above $2000 a tonne (normally closer to $1500/t) as demand soars from producers looking to convert their new-found moisture into high quality winter feed.

Glyphosate to spray weeds is also in very short supply.

Roma may revert to one sale per week

Weekly yardings at Roma are likely to remain subdued as producers, many of whom are destocked to less than 50 percent of their usual numbers, shift their focus from keeping cattle alive to rebuilding their herds.

A lot of calves that would have been this year’s turnoff were sold in the light 150kg range as drought raged in November and December last year, while many cattle that would normally be held for sale as heavy feeders at 400-450kg were offloaded early at 300kg at the same time.

There are currently around 3000 cattle booked for tomorrow’s Roma Store sale but cancellations are still coming through after the local area received another 40mm late last week, and a front moving through from Charleville to Bollon this morning has also caused further withdrawals.

The looming cattle shortage has raised the prospect that Roma may temporarily revert to one sale per week, with the weekly prime sale every Thursday dropped off in favour of a single weekly combined store and prime sale every Tuesday.

The Thursday prime sale would return as soon as numbers start to come forward again.

Mr Turner said the concept was being discussed but a decision on whether to take that course has not yet been made.

Asked how he sees cattle numbers going forward, he said he felt the full extent of the shortage is yet to be seen.

“I personally don’t think the shortage has come yet,” he said.

“It will come in the next few months when the rain stops and everyone settles down and they get out the cattle they want to sell, they will be gone and the others will be putting on weight.

“People will be trying to build their numbers up.”

However he also added that high prices also have a tendency of magically bringing forward cattle no one thought existed.

“It is a big paddock out there, when you start getting $5 for weaners it is amazing where they come from.”

Out of the frying pan…into the flood!

Sergeant Vaughan Collins, Officer in Charge of Thargomindah Police Station, said Thargomindah is now seeing the effects of what happens when a moderate flood level “dry” flood (caused by rain that fell hundreds of kilometres upstream) is combined with more than 200mm (eight inches) of local rain within 48 hours. “It means you go from drought, to drought with a major flood level warning…and fast!,” he said in a social media post.

He said the Bulloo peaked last Friday at the bridges with a river height of 5.6 metres, the highest peak since the 2010 flood, which itself was the second highest peak on record (the highest being 6.78m in 1974). Remember – if it’s flooded, forget it!

Sergeant Collins said the local rainfall, combined with the running waters of the Paroo, Bulloo and Wilson rivers and Cooper Creek, had cut virtually every single road in the Shire.

After eight years of drought, perhaps it was the time between drinks, but some drivers were now taking unnecessary risks, he said.

“Astonishingly, the driver of a heavy vehicle allegedly drove around road closures without a lawful excuse. He was sent to the local magistrates court for unlicensed driving and disobeying a sign.

“The message is clear –if it’s flooded, forget it!”