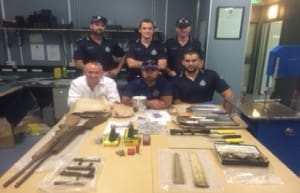 Queensland Police with a quantity of meat, knives, mobile phones, drug paraphernalia, three vehicles and a number of firearms recovered during the raids.

Four men have been charged following the alleged theft and killing of cattle from a large station in northwest Queensland.

Police from Normanton and Karumba allege that two beasts were unlawfully killed at a cattle station last weekend, and executed  six search warrants from Wednesday to Friday last week.

It will be further alleged that a quantity of meat, knives, mobile phones, drug paraphernalia, three vehicles and a number of firearms were also recovered during the raids.

The search warrants resulted in four men aged 24, 37, 32 and 23 from Normanton being charged with one count each of killing an animal with intent to steal and stealing.

Further charges are expected and investigations are continuing.