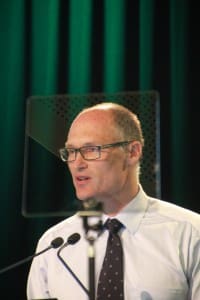 Mr Edmonds, MLA’s central marketing & industry insights general manager, joined MLA in 2012 and has developed the marketing function and team at MLA over that time with a series of achievements including the development of the global “True Aussie” brand Australia program.

He was also responsible for a number of strong-performing domestic marketing campaigns, for both beef and lamb.

In other MLA developments this week, chairwoman Michele Allan announced that Dr Greg Harper has resigned from the company board.

Dr Harper was scheduled to retire from the Board at this year’s AGM and had decided not to nominate for re-election due to the time commitments required by his new role as executive director of agriculture R&D with the Victorian Department of Economic Development, Jobs, Transport and Resources.

He has been a director of MLA since 2009, appointed primarily for his extensive R&D experience through his prior career at CSIRO.

“I am very pleased with what MLA has achieved over my time as a Director, and I have thoroughly enjoyed the opportunity to contribute to the industry in that capacity and to learn about the industry’s strategies for growing red meat exports, particularly into Asia, the Middle East and the US,” Dr Harper said.

“MLA has made some strong advancements in the balance of its R&D portfolio, and I look forward to seeing the company continue to invest in future success on behalf of industry,” he said.

Dr Allan said Dr Harper had brought wonderful insights and a global perspective to our discussions particularly around research and development. “We wish him every success and thank him sincerely for his significant contribution to MLA and the industry,” she said.

Dr Harper’s early departure will not change the number of board vacancies to be filled at this year’s MLA annual general meeting, to be held in Brisbane in November.