THE fodder industry’s national representative body has ramped-up calls for a market database to provide better insight into stocks and demand, as the growing need for livestock feed drains hay supplies. 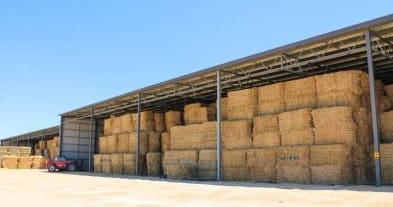 “Industry representatives continually ask ‘how much fodder is in the system? Where is it going? How much is there in reserves?’ he said.

“Quantitatively – I don’t know. The industry doesn’t know. That information is not recorded for domestic fodder production and sales. What we know is qualitative information. But in times like this – drought and bushfire recovery – there needs to be more transparency in the market so Australian agriculture has the capacity to forecast feed requirements and plan.”

“It is something everyone wants, it was mentioned by the grains industry, and there’s value across a lot of industries, but it is a hard nut to crack.” Mr McKew said the need for better data was a theme of the discussions at the Canberra meeting. While the Roundtable was a first step in a long process, he was encouraged by the Agriculture Department’s “sympathetic ear” regarding the database.

Mr McKew hoped Government involvement would provide the much-needed assistance and funding, which had previously been lacking, to develop a model to allow Australia’s agricultural industry to better manage seasonal risk.

During his presentation to the Roundtable, he praised the agricultural industry for banning together to donate fodder, and the subsequent transport, to fire affected farmers. But Mr McKew stressed the urgent need for fodder in bushfire regions would further drain the nation’s low stocks.

“Australia will not necessarily run out of fodder, but the quantities available for trading – available for those who need to buy it in quantity – could run out,” he said. “The Australian Fodder Industry Association has been told that some farmers with stocks of hay have held-off putting it into the marketplace due to the uncertainty clouding the season and a need to sustain their own livestock enterprise.”

Importing fodder would not be an option either, Mr McKew said.

“The biosecurity risk is too high, and the Agriculture Department has said that in the past too,” he said. “We could potentially end up with a lot of worse problems linked to imported weeds and diseases in imported hay and fodder.”