Drive to invest in new knowledge and technology, MLA shareholders told at AGM

MEAT & Livestock Australia will launch a Carbon Neutral Red Meat Product Catalogue targeted at producers in coming weeks, as part of its Carbon Neutral by 2030 commitment. 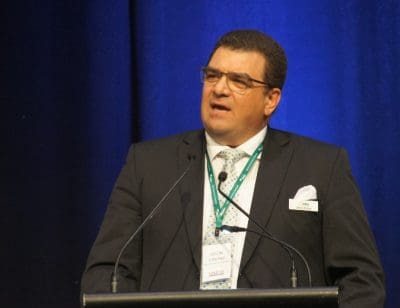 The database would be similar to the Tools and Resources for Drought Resilience catalogue launched by MLA back in in September.

“The catalogue will clearly outline products that are available or soon to be available that can contribute to CN30 and will be a much sought-after resource that producers can use to start or accelerate their carbon neutral aspirations,” Mr Strong told levy payers.

In what must surely be a record low for any MLA annual meeting since the producer-owned service delivery company was established in 1997, just a single question was put to the board and management during questiontime in today’s AGM.

A stakeholder asked whether MLA’s new carbon accounting tool (see earlier Beef Central report) was available yet for use by landholders.

Mr Strong said the product was still under development, but it was a key part of CN30 projects MLA was working on.

“We will make sure we include communication about its progress with levy payers as soon as we can – it should be in the next month or two,” he said.

The new carbon accounting tools would be included in the new Carbon Neutral Red Meat Product Catalogue being launched in coming weeks.

Drive to invest in new knowledge and technology

Regardless of the range of discussions in the carbon neutrality space, MLA would continue to invest in new knowledge and technology to support the industry to achieve a productive, profitable, net-zero greenhouse gas emissions position by 2030 – without compromising livestock numbers, Mr Strong told members.

“It’s a key part of our strategic plan and works hand-in-hand with industry’s vision to double the value of red meat sales as the trusted source of the highest quality protein in the next ten years.”

“Adoption of world-leading technology such as livestock supplements, forages, genetics and grazing land management will enable the Australian red meat industry to achieve its 2030 target, positioning Australia as the prime example of climate-friendly, high-quality red meat products, to be enjoyed in more than 100 markets across the globe.”

Next year will see MLA deliver a collective of new investment partnerships to scale up activity under the CN30 Roadmap, Mr Strong said.

Under the new Carbon Neutral Pathways Partnerships, MLA would invest with research organisations and commercial partners aiming to achieve a 20pc improvement in livestock productivity, 50pc reduction in enteric methane emissions in 1.25 million cattle and 3.5 million sheep, and 15 million tonnes of CO2 captured and stored as carbon in vegetation and soils across ten million hectares of Australian grazing land by 2025.

The research will focus on technologies and practices that will support industry’s aspiration for a profitable and productive carbon neutral future and will see up to $60 million worth of investment, with the vast majority being contributed by industry partners and matched by MLA using Federal Government dollars via the MLA Donor Company.

“This is significant, as it clearly demonstrates there is a huge appetite for co-investment in a carbon neutral future for our industry,” Mr Strong said.

2022 would also see MLA’s new National Pasture Biomass Project kick into gear. This will provide every MLA member with the opportunity to access a monthly property level estimate of their pasture biomass through a secure and easy-to-use interface.

“It will shift the dial from ‘early adopters’ using the technology to all MLA members being able to access information on the status of their feedbase in much the same way as they do for weather information.”

The National Pasture Biomass initiative will also contribute to delivering carbon neutrality through providing a data platform to collect, analyse, aggregate and report on production and natural capital.

Not surprised by industry’s success

Reflecting on the industry’s operating environment over the past 12 months, Mr Strong said despite everything the past year had thrown at the industry, it was in “fantastic shape.”

“But this success should not come as a surprise – it’s the culmination of many years of hard-work, and focus on improving the success of our industry, driven predominantly by red meat producers who continue to deliver premium quality red meat to feed a growing and increasingly affluent global population.

“Those producers time and again had proven themselves to be responsible custodians of land and livestock who has a passion for what they do, with a commitment to continuous improvement, who are closely attuned with the high expectations of consumers.

“They continue to push back against a vocal minority with an anti-farming agenda who choose to critique and criticise their livelihoods and way of life,” he said.

Mr Strong referenced success beef marketing calaings during the year, including the Our ‘Beef The Greatest’ campaign staged as the Tokyo Games got underway.

Beef’s value share (of overall meat protein sales) had increased 0.5pc – the highest it had been in the past 18 months, equating to $40 million in a category worth $2.3b during the capiangn.

Australian household penetration of beef increased by 0.6pc during the campaign period, representing an additional 67,000 households.

“The challenge – as ever – is how to build momentum for future campaigns – and how we can mobilise and motivate others to share our story,” Mr Strong said.

“Our focus therefore has also been on the development and execution of a whole-of-business approach to promote and defend the positive attributes of red meat.”

Mr Strong said it was clear that much of the commentary about consumers’ declining commitment to red meat was overblown and out of context, and the industry shouldn’t be afraid to call it out.

“We must all be on the front foot proudly sharing stories about the credentials of red meat and how its produced, based on facts not mistruths. Nothing can compete with a large group of committed people if we are all proactive and positive about what our products have to offer – and, we all know, Australian red meat is unrivalled.”

MLA was now well into year two of its Strategic Plan 2025, and planned to continue to build on the successes of the past 12 months into the future – further strengthening the resilience, sustainability and productivity of the red meat and livestock industry.

“We find ourselves looking ahead to a period of untold prosperity that can transform our industry from what we known, to what it can be tomorrow – and for decades to come,” Mr Strong said.

“We have a fantastic product with a first-rate reputation that consumers recognise and are willing to pay for. Our job therefore is to connect with consumers both here and around the world and make sure they remain excited about Australian beef, lamb and goat meat.”

“Make no mistake, we should all be incredibly proud of our industry and enthusiastic about what the future holds. It is right now that we have an opportunity to lock in as much of our progress as possible and take full advantage of the success from our collective efforts to date.”

“Long may our success persist – and it can for many years to come – but only if we continue to put our best foot forward as part of a unified supply chain.”