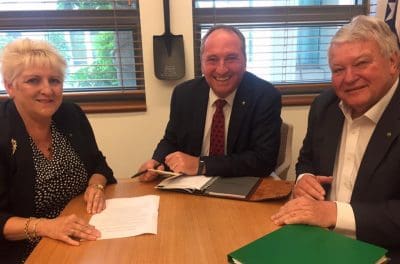 Graziers will not be forced to sell their property against their wishes, agriculture minister Barnaby Joyce confirmed this afternoon.

Under the plan the Defence Department intended to acquire thousands of hectares of private land near its existing base at Shoalwater Bay, about 75km north of Rockhampton.

The plan sparked outrage from property owners and all sides of Queensland politics including the Labor Government, the Liberal National Party Opposition and One Nation.

Mr Joyce, who met with affected landholders near Rockhampton last week, said he could now make the “clear unequivocal statement that no person’s property can be purchased against their wishes for defence land whilst trying to leave them every avenue of giving them the best price if they choose to sell”.

“I hope this mollifies the concerns presented to me in Central Queensland,” he announced on his Facebook page today.

“Local members Michelle Landry and Ken O’Dowd have been tireless advocates on this issue and Shoalwater Bay remains a premier defence base for our nation and there will still be the voluntary sale of land under the Aus-Singapore defence agreement.”

AgForce Queensland said dozens of farming families in Central and North Queensland were now breathing a sigh of relief after the Federal Government confirmed it was abandoning plans to force graziers off their land to expand military training areas.

“AgForce has always maintained that farmers should not be forced to sell their land to the Department of Defence, so it is good to see the Federal Government has finally listened and acted on the concerns of local landholders,”AgForce General President Grant Maudsley said.

“It’s disappointing that these farming families had to go through months of unnecessary stress and heartache, but we are pleased the right result was achieved in the end.”

“Agricultural land is constantly being taken away from landholders for a variety of reasons such as national park expansions and mining developments, as well as being rendered useless by ill-conceived Government regulations,” he said.

Mr Maudsley said the backdown on the proposed Defence land grab demonstrated yet again how good outcomes could be achieved when farmers united and stood together against poor Government policy.

“Farmers campaigned hard to defeat the Palaszczuk Government’s harsh and unnecessary vegetation management laws last year in the Queensland Parliament, and we fought hard to get the Federal Government to retreat on their proposed Defence land grab,” he said.

“It shows that politicians can’t take rural support for granted. AgForce will continue to stand up for our members to make all politicians understand the need to get behind farmers to grow our businesses, create jobs in the regions and produce more food for a growing global population.”