THE Australian dollar continued to trade at well below US70c this morning, having deteriorated sharply over the past fortnight.

Apart from a brief slip in February when the Ukraine War first erupted, the A$ is now at its lowest level since a period after mid-2019, during the depths of the COVID infection period. Prior to that, the A$ has not traded this low since early 2009.

The Aussie dollar sank well below US69c in currency trading this morning, currently sitting at US68.99c, driven by sentiment over accelerating inflation, worries about a global recession and China’s COVID lockdowns.

As recently as January, the A$ was trading as high as US77.6c, representing a ten percent decline in value since then.

A softer A$ works in beef exporters’ favour, making Australian product look more price-competitive on the world stage. The overwhelming majority of global beef trade is made in US$. Over a 12-month cycle, a 1c shift in the value of the A$ can be worth $60 million to the Australian beef industry.

The price of imported Australian 90CL beef into the US provides a useful tool to illustrate the point.

Measured in A$ terms, the 90CL imported cow meat price on Friday was A913c/kg, up more than 13c/kg on the previous week. When measured US$/kg terms, the price for the same commodity was US632.5c/kg – 6.6c/kg cheaper than the week before. That’s the currency effect.

The softer A$ comes at an opportune time for beef processors, with demand in the domestic market declining in recent weeks, due to a range of influences (see earlier report).

Adding further weight to recent currency falls was a series of Chinese economic activity data released earlier today, missing analysts’ expectations. The A$ is vulnerable to these sways in perception of China’s prospects, given the close trading relationship.

The recent fall in currency value has coincided with a broad and sharp sell-off on the Australian Stock Exchange.

The lower the A$ falls, the more upwards pressure it will put on inflation and the cost of living, because overseas-made goods become relatively more expensive.

Overseas, the US Federal Reserve is in the process of raising interest rates, and potentially quite aggressively. The higher US interest rates go, relative to interest rates in Australia, the more demand there is for US dollars, and the lower the demand for Australian dollars, forcing our currency lower.

Westpac’s currency strategist Sean Callow said in recent commentary that in the short term, the A$ is likely to drop to US68c – roughly where it was at its low point back in June 2020.

Australian currency is far from alone in its movement against the greenback, however. Many of the US dollar’s global counterparts are falling to levels that have not been seen for years. The UK Pound hit a new low for the year, the Japanese Yen dropped to its weakest level since 2002, while India’s Rupee slumped to a record low.

Many of the concerns about slowing global growth are being driven by China, analysts said.

Chinese Premier Li Keqiang warned on the weekend of a “complicated and grave” employment situation as Beijing and Shanghai tightened curbs on residents in a bid to contain COVID outbreaks in the country’s largest cities. China’s weak export outlook comes on the heels of a report last week showed manufacturing activity plunged to its worst level since February 2020. Currencies linked with Chinese growth struggled, with both the A$ and NZ$ slumping around 1pc on the day of the announcement.

Excluding the pandemic, this is the largest fall in consumer confidence recorded in the survey since June 2015 (see graph). 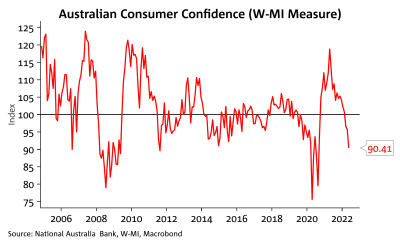 “The details suggest concerns around inflation and interest rates are driving with the survey period covering the RBA rate rise as well as coming after the much higher than expected Q1 Consumer Price Index,” NAB said.

There was a very sharp fall in the ‘family finances next 12 months’ question in the survey, down 11.2pc, along with sizeable falls in ‘economic conditions next 12 months’ (off 5.8pc) and ‘time to buy a major household item’ (off 5.7pc).

In terms of implications, three important developments stood out from the survey, NAB said: