The Albanese Government has released a public discussion paper seeking ideas on a long-term sustainable biosecurity funding model, prompting a positive response from a key farming group, but also a warning that the ‘days of buck passing need to end’. 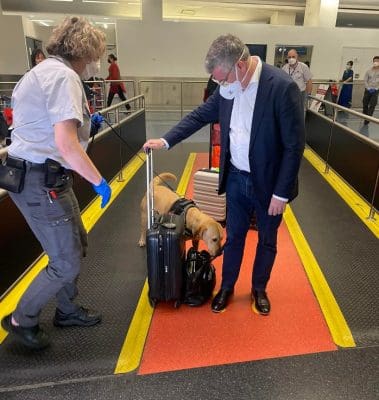 The paper looks at the benefits a strong biosecurity system has for all Australians, along with funding arrangements and investments to support biosecurity operations in the longer term.

Minister for Agriculture, Fisheries and Forestry, Murray Watt said the Albanese Government is delivering on its commitment to strengthen Australia’s biosecurity system.

“Australia is free of both diseases, and since their appearance, Indonesia is making good progress on getting them under control. But it’s demonstrated that we can’t afford to take our foot off the pedal and get complacent on our biosecurity.

“The October Budget includes a $134 million down-payment on the Government’s commitment to long-term, sustainable funding for biosecurity, by investing in front line staff, 20 new detector dogs and stronger defences against the threat of FMD and other diseases.

“We are also laying the foundations for a national livestock traceability scheme that delivers a fit-for-purpose, modern system to protect our valuable livestock industries.

“We know there is broad support for sustainable funding and we want to discuss with the Australian public the best way to go about that.

“I encourage everyone to look at the discussion paper and give us their views and ideas on what a model could look like.”

In response to today’s release of the discussion paper, NSW Farmers said it welcomed the federal government’s move towards a sustainably-funded biosecurity system, but said “the days of passing the buck need to end”.

“The biosecurity threats not just to our food and fibre production but to our entire economy are quite serious,” Mr McColl said.

“We have been arguing for some time that we need sustainable funding and a long-term view of biosecurity controls to keep our country pest and disease free.

“This is a promising move from the federal government, and I would encourage everyone to take a look at the discussion paper and have their say.”

The discussion paper identifies Australia’s animal, plant, human and environmental health outcomes rely on strong biosecurity controls to manage and minimise the risk of pests, weeds and diseases entering, emerging, establishing or spreading within Australia, while facilitating trade and the movement of plants, animals, people and products.

However, Mr McColl said he was concerned about the scope of the paper, which would not consider the biosecurity activities of other jurisdictions. The lessons of COVID-19, Mr McColl said, were that gaps in bureaucratic oversight led to gaps in our control and response efforts.

“We cannot afford to have the states and the Commonwealth pointing fingers and passing the buck while a disease or pest spreads far and wide, which is precisely what we saw with COVID,” Mr McColl said.

“It is absolutely critical that we have a biosecurity system that is focused on the outcome of keeping disease, pests and weeds out, regardless of who is responsible for compliance or funding.

“If we fail to get everyone on the same page, and leave gaps in the system, we run the risk of wasting time and effort in the event of an outbreak.”

Mr McColl said farmers wanted what most Australians wanted – governments to get on with the job, and sort out jurisdictional issues later.

“People in rural communities couldn’t care less if it’s state or federal or local money funding something, as long as it gets funded,” Mr McColl said.

“Because they are the people who will feel the impact of an $80 billion Foot and Mouth Disease outbreak, they’re the ones who will lose work and won’t be able to move around.

“This discussion paper is one part of the puzzle – the other part will be all governments working hand-in-hand with other stakeholders to ensure everyone knows exactly who needs to do what and when.”

Source: Minister for Agriculture, Fisheries and Forestry. NSW Farmers. The Biosecurity Sustainable Funding discussion paper and an opportunity to provide feedback is available here until 21 November 2022.