Commercial use of eNVDs draws close

COMMERCIAL use of electronic National Vendor Declarations from farms to processors and feedlots will begin with the issuing of eNVD production licences to three software companies by Meat & Livestock Australia this month.

“We’ve had a number of additional software providers and integrators come on board during that period and we’ve had the opportunity to review the feedback from the field trials.

“We’re now at a the point that we’re satisfied that we can starting allowing a number of those integrators who completed their field trials to start offering their software in the market place.” 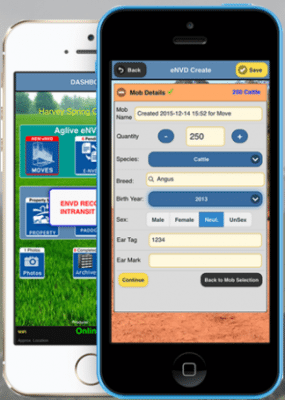 Example of the eNVD image on AgLive’s iphone app

MLA expected to issue eNVD licences to the software companies AgLive, Sapien and Thorsys later this month, she said.

“So what they will be able to do is to offer software products that enable a producer to create an eNVD electronically through a software system or an app that might sit on phone, tablet or computer.”

The proposed eNVD platform will be a nationally agreed system that seamlessly transfers electronic livestock integrity data from the consignor — the livestock producer — through the supply chain to the intended receivers, and is verified against industry systems data (eg. PIC, LPA accreditation, NLIS statuses) to deliver improved data integrity.

A fully-operational eNVD system will save the red meat industry an estimated $5.8 million each year. It is expected to reduce the cost of processing inaccurate or incomplete NVDs, reduce data re-entry, retrieval and storage costs, ensure the latest NVD versions are used by producers and improve product integrity and transparency.

In ongoing trials, supply chain participants will be allowed to use the licensed software to submit eNVD records to the central NLIS database. eNVDs have been trialled on a producer-to-producer or producer-to-processor and feedlot basis, but the next step would to match the eNVD software with the systems being used by Australia’s saleyards.

“We haven’t had extensive testing in the saleyards, so what we are looking to do is to work with the software providers in the saleyard sector to get them to adapt their software to be able to receive the eNVDs,” Ms Quigley said.

However, producers will initially be able to use the licensed eNVDs for property-to-property stock movements and a number of supply chains to processors are also looking to implement eNVD use, Ms Quigley.

“Producers who are operating in supply chains that are supporting the eNVD will be able to send their NVDs electronically for direct consignments as well.

“We expect that over the next 4-6 months that we will have a good 10 (producer to processor) supply chains that are set up, ready and equipped to receive eNVDs,” she said.

“And I guess our hope is that we will have a level of availability with farm-to-feedlot as well.”

The ongoing commercial trials aim to demonstrate the accuracy and effectiveness of the eNVD system, and to identify any refinements, fixes or enhancements prior to its broader roll-out. MLA will evaluate the eNVD system within commercial environments, across a range of market segments, supply chains and operational scenarios.

Once eNVDs are released for general use, livestock vendors will be able to choose to use either an eNVD, a papered-based NVD or an eDEC.