Carving up $100m to fix the north’s beef roads 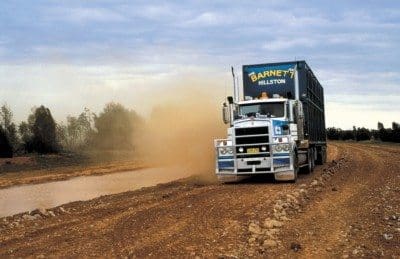 The upgrade of some of Australia’s iconic cattle routes could provide significant benefits to the nation’s livestock industry, while at the same time minimising stress for both truck drivers and cattle, the CSIRO says.

The CSIRO’s Transport Network Strategic Investment Tool (TraNSIT) has been applied to road upgrade proposals, submitted by stakeholders, under the Federal Government’s $100 million Northern Australia Beef Roads Program, with results presented at a forum in Darwin this week.

“The aim of the computer-based logistics tool is to assist the government to identify road investment priorities, in terms of benefits for the beef industry and savings in transport costs,” CSIRO TraNSIT project leader Dr Andrew Higgins said.

The beef road submissions included regional roads across Queensland, Northern Territory and Western Australia with the successful submissions due to be announced by the government from mid-2016. The proposed upgrades ranged from new bridges to sealing and/or widening of roads to enable access for higher productivity vehicles.

The proposed upgrades ranged from new bridges to sealing and/or widening of roads to enable access for higher productivity vehicles.

“TraNSIT is crucial in helping the government to prioritise their $100 million investment to maximise industry benefit,” Dr Higgins said.

“Farmers will be saving money on transport but there will be increased road safety for all drivers using upgraded routes. Shorter trip times and better roads will also result in less impact on cattle and higher cattle prices.”

TraNSIT provides the most comprehensive mapping and optimisation of the cattle supply chain in Australia.  It accounts for 20 million cattle transport movements in a given year between over 100,000 enterprises.

Outputs from TraNSIT were presented in Darwin following workshops in Rockhampton and Kununurra last year. The workshops, hosted by the Department of Infrastructure and Regional Development, provided information to stakeholders, such as local councils, beef producer groups and government bodies.

“Today’s meeting provided another opportunity for stakeholders to participate in the allocation of the Federal Government’s commitment of $100M dedicated to beef roads in northern Australia” said Ms Hayes.

“While $100million doesn’t go far when divided among the three jurisdictions, the process itself has established a framework for developing a long-term northern beef road blue print for strategic investment in upgrading critical road infrastructure.

“The beef roads of northern Australia are of a very low standard, with close to eighty per cent of the NT’s 22,000km of roads still unsealed and largely impassable for months of the year.

“To enable the cattle industry to take full advantage of the diverse markets and year round demand for Australian beef, the Federal Government needs to map out a long term commitment of funds to the north.

“The NTCA believes that CSIRO’s TRANSIT tool is a significant starting point for capturing the cost benefit of nation-building investment in northern beef roads, but is yet to fully capture the cost of doing business for pastoralists due to the state of the roads in the NT.

“For example, the premium charged by transport companies to cover the cost of wear and tear on vehicles when working on unsealed roads is not captured in the model.

“A commitment by the Federal Government to dedicated investment in the beef roads of northern Australia will allow the cattle industry to fully realise its potential, guarantee year-round reliable supply of quality Australian live cattle and beef to our customers, and encourage capital investment into the industry to allow for development and great productivity.”