Can’t get to the Ekka? You can still experience the show’s best beef at these regional pubs ONCE-a-year, steak lovers from around Queensland and northern New South Wales get the chance to experience the “best of the best” beef from one of the Ekka’s premier cattle competitions in a country pub close to home.

With the Ekka now in full swing for 2022, that time is on again now.

In what must just about be Australia’s most exclusive brand, beef from the cattle entered into the 100 day class of the RNA paddock to palate competition is distributed by JBS under the “Royal 100” label to regional pubs around the State, from Weipa to Tenterfield (see full list below this article).

It is only available for a limited time for the few weeks of the Royal Queensland Show until supplies run out.

The Royal 100 brand was developed by JBS’ business development manager Denis Conroy as a way to enable people who live in the regions where the best beef is produced, but who can’t make it to Brisbane for the Ekka, to still get to experience the premier beef from the show.

Brisbane beef afficionados don’t miss out either, with the Royal 100 brand available for the next few weeks at a range of Brisbane venues, including the Royal Queensland Steakhouse at the Ekka.

For a full list of places where Royal 100 can be purchased see below, or view the locations and brand specifications on the JBS website.

As crowds return to the Ekka this year for the first time in three years, beef cooking demonstrations are proving popular. 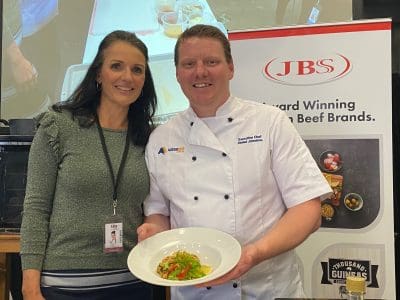 Mr Conroy said Royal 100 cube and sirloin has been in high demand at the Royal Queensland restaurant since the show got underway last week.

Feedback from regional hotels was also proving very successful as the brand becomes available for a limited time, he said.