The Chinese soccer team needs to eat more premium Aussie beef, a Chinese beef importer and cattle lot feeder has told the media. Chen Hong, a spokesman for the Snowdragon Beef Company based in Dallan in China’s north east, told AAP that the Chinese soccer team’s ranking of 97th in the world is due to a lack of premium bovine protein. “One reason is that top quality beef is not widely available,” he said. Snowdragon has imported 3000 tonnes of chilled Australian Angus beef in the past two years and also runs its own stock-raising operations catering for the high-end restaurant and hotel market. AAP said the company runs 30,000 cattle, and each beast produces 250 kilograms of beef worth 2000 renminbi or $400 Australian per kilo. It says the feed barns use giant mechanical massage brushes to keep the cows nice and limber while also piping in music to the cattle, which Mr Chen said kept the cattle relaxed, conserved their energy and boosted meat flavour.

Princess Anne has praised Queensland’s beef industry while opening the Royal Agricultural Society of the Commonwealth conference in Brisbane this week. The Princess Royal spoke highly of Queensland’s reputation within global agriculture during an address to 230 conference delegates at Brisbane’s RNA showgrounds. “Its history as a producer and exporter, particularly of beef, in Australia and a world leader in livestock production, management and technologies is widely renowned. It is also renowned for exhibiting that extraordinary strength and resilience in the wake of certainly things like this drought but in previous years, extraordinary devastation caused by flooding.” The Princess Royal is the president of the Royal Agricultural Society, having taken over the position from her father Prince Philip, who founded the society more than 50 years ago. She said she was surprised that the RAS conference was being held in Queensland for the first time. “I’m actually quite surprised it’s the first time it has been here given the extraordinary history of Queensland as one of the greatest primary producing areas in the world,” she said.

Online news outlet SmartCompany has reported this week that some Australian companies are being targeted for abuse simply for selling halal food products. A Perth restaurant franchisee told the news service he had received “a flood” of online abuse for selling halal beef. Peter – who wished to only be identified by his first name to avoid attracting further attention – explained that anti-halal campaigners have targeted his restaurant over the past two months. Comments on the franchise’s Facebook page have ranged from “NEVER support terrorism NEVER” to “You should be serving Australian Meat [sic] with Australian standards not this halal bullshit … Un Australian [sic] in every way”. However, other Facebook commenters showed their support for the restaurant. One person wrote: “Just cause it’s halal does not mean it supports terrorism and saying these comments shows how ignorant (politically) you are … I loved the food and staff was awesome.” SmartCompany also reported on a significant online backlash a NSW biscuit manufacturer has received for producing halal-certified Anzac biscuits. To read the full story on the SmartCompany website click here

The NSW Office of Water this week reported the conviction and fines imposed on Mongrel Developments Pty Ltd and a Dorrigo landowner in the Downing Centre Local Court for the illegal construction and use of a dam. The Company and the landholder were found guilty of four charges brought against them by the Office of Water, with the Court imposing fines totalling $20,000, as well as awarding costs against them in the amount of $20,000. The charges brought against the Company and landholder related to the construction and use of a 212 megalire dam at Dorrigo without approval required under the Water Management Act 2000. In handing down the findings, the Magistrate noted that the dam’s 212 megalitre capacity was more than 10 times the size that would be permitted to be constructed without an approval. In addition to the fines imposed, the Court also ordered that the defendants publish a notice in a local paper about the case. The NSW Office of Water said anyone with information about suspected illegal water activities could contact its office confidentially on 1800 633 362 or by emailing – watercompliance@water.nsw.gov.au 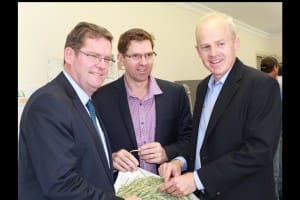 National hay marketing business Feed Central has established a new quality assurance centre and feed testing service in Toowoomba, which was opened last Friday by Queensland agriculture minister John McVeigh. Feed Central managing director Tim Ford said the new facilities in Toowoomba provide the only place in Australia where growers can get visual assessment and grading of their hay and grain plus feed testing serBurevices with a 24-hour turnaround period.He said the new services will help farmers to improve their farm feeding efficiency, especially those supplementary feeding or intensively feeding livestock.The feed testing service is in collaboration with Dairy One, a USA cooperative that is a world leader in feed testing of hay and grain, and will be known as Feed Central’s Dairy One Feed Testing Service and Quality Assurance Centre.The centre has been dedicated to the parents of Feed Central Managing Director Tim Ford, Kevin and Marie Ford, for their volunteer support in helping to establish the business.

NSW primary industries minister for Primary Industries, Katrina Hodgkinson, has announced a major on-ground offensive against wild dog predation across NSW this spring. Local Land Services, other NSW Government agencies, industry bodies and local wild dog control groups will target more than 1000 properties, involving 62 wild dog control groups and will lay more than 240,000 ground and aerial baits covering some 765,000 hectares. She said the most effective campaigns were well-coordinated, landscape-wide and used as many available tools and techniques as possible. “Perhaps the most pleasing part about this campaign is the high number of different land managers that are participating in control programs,” Ms Hodgkinson said. “Wild dogs and other pests do not respect lines on maps, so it is imperative that a true cross-regional and tenure-neutral approach is taken to control.”

Official figures for the 2014 calendar year so far show that the Port of Darwin has already exported over 392,000 head of cattle. Prior to that, the calendar year record was in 2008 when the Port of Darwin exported 359,307 head of cattle. NT Minister for Primary Industry and Fisheries, Willem Westra van Holthe, said this achievement was due to the hard work and determination of pastoralists on the land. “To think only a few years ago, the live export ban brought this industry to its knees and now it is bigger than ever before,” Mr Westra van Holthe said. “Our Territory pastoralists are a resilient mob. They have been through some tough times and considerable hardship but this achievement is a symbol of their hard work and determination. Due to the diversification of the market, beef prices have risen and exporters are now paying record prices, people are talking about $2.45 per kilogram for feeder steers. That’s incredible. Further to this, Indonesia has released 260,000 import permits for the fourth quarter of this year. This combined with emerging markets in Cambodia and strong trading relationships throughout Asia are all good signs of growing this industry even further.”

The University of Queensland has been ranked among the world’s top 10 agricultural science research organisations in latest National Taiwan University rankings. The NTU rankings are one of four major independent measures widely used to evaluate university performance based on scientific papers, research productivity, impact and excellence. While UQ is ranked 56th globally overall in the latest NTU report, its rank for agricultural science has now moved into the world’s top 10. UQ Queensland Alliance for Agriculture and Food Innovation Director, Professor Robert Henry said that unlike some universities around the world, many of the UQ’s programs focused on research questions in a tropical or sub-tropical environment. According to NTU, UQ’s rank for agricultural science has moved up from 25th place (2010) to 10th place in October 2014, an increase of 15 points in four years.