AUSTRALIA’S Federal Government has seemingly overlooked its own AUSVETPLAN on exotic disease incidents by claiming a powerful and irritating chemical was preferred for decontaminating footbaths.

The Federal Government has been under pressure from farmer bodies to implement footbaths for travellers coming to Australia from Indonesia to lower the risk of contaminated soil bringing Foot and Mouth Disease here.

AUSVETPLAN contains the nationally-agreed approach for the response to emergency animal disease (EAD) incidents in Australia. The plan is captured in a series of manuals and supporting documents.

Yet despite AUSVETPLAN’s current (Version 3.2, 2008) Operational Procedures Manual on Decontamination advising that citric acid – found in orange juice – can be safely used for personnel and clothing contamination, the Department of Agriculture Forestry and Fisheries has claimed the chemical Virkon®, that is irritating to skin, eyes and the respiratory tract, was usually used in footbaths to control viral diseases.

On page 21 of the AUSVETPLAN decontamination manual it says:

“Citric acid, a milder acid, is available in solid form, is active against acid-sensitive viruses and can be used safely for personnel and clothing decontamination. It is particularly useful when added to detergents for the inactivation of foot-and-mouth disease virus.”

“Footbaths to be effective usually need to be deep enough to cover the foot and need to be regularly replenished when they become contaminated with organic material such as soil and manure from footwear.

“Passengers arriving from Bali often are not wearing enclosed footwear and cannot be exposed to a chemical such as Virkon® on bare skin (if they are wearing thongs, flip-flops, sandals) or soaking sandshoes and socks,” the spokesperson said.

“There is an occupational and workplace risk of trip hazard, having children trip or fall into the bath, placing the baths in busy international air terminals.

“However, the need for like measures is a matter of ongoing investigation as to their merit in managing the risk.” 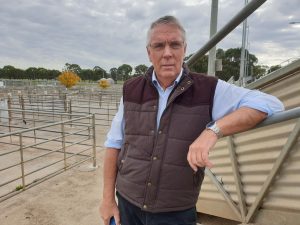 As Federal Agriculture Minister Murray Watt was in Jakarta today to meet with authorities on the FMD outbreak in Indonesia, Victorian Nationals leader and Shadow Minister for Agriculture Peter Walsh questioned the Minister’s priorities, with Federal Labor still refusing to enforce sterilisation of footwear of all people arriving from Indonesia.

“FMD is easy to transmit, but will be impossible to combat if it breaches our borders which is why we must take every action now to prevent it reaching Australian farms.

“Minister Watt claims he’ll ‘implement any practical measures that will make a difference’, but continues to offers weak excuses against industry’s calls for sterilising footbaths for all arrivals,” he said.

“Instead, Labor’s focussing its efforts on advertising at the airport.

“But this is cold comfort to Victorian farmers who face an up to $6 billion economic hit if there’s even a small, contained outbreak of FMD,” Mr Walsh said.

“Bolstered biosecurity measures at airports that ensure every single traveller is stopped, questioned and required to sterilise or get rid of footwear that might be carrying the disease is the only option to keep our borders safe.”

Mr Walsh said he wrote to the Federal Minister last week, condemning Labor’s slow action and demanding an immediate boost to biosecurity at all of Australia’s ports of entry.

“With thousands of Australians travelling to Indonesia at the moment, more safeguards must be put in place.

“Victorian and Australian producers can’t afford the comprehensive trade restrictions and strict isolation protocols that would be required if an outbreak occurred,” he said.

“Farmers and the agriculture industry deserve confidence that all levels of government are prepared to take all appropriate action required – no matter how disruptive – to protect producers, livestock, and our economic future.”

Shadow Minister for Northern Australia, Senator Susan McDonald has suggested suspending flights from Bali should be considered.  Senator McDonald said it was not clear that the Federal Government and industry had responded quickly enough and adequately to an outbreak of foot-and-mouth in Bali, and believes suspending Bali flights should be investigated.

“We saw a swift closing of borders with Covid, and I believe similar measures should be discussed for foot-and-mouth, and if not flight suspensions, then quarantine for returning passengers,” she said.

“Some people will say this is an overreaction and will adversely affect the Indonesian economy, but the devastation of a foot-and-mouth outbreak in Australia would be widespread to not just producers but consumers and taxpayers as well. It is truly difficult to comprehend how bad this would be which is why it is critical that we do not allow FMD into Australia.

“Australian tourists in Bali are walking through cow dung and bringing soiled shoes and suitcase wheels back home but anyone who flew back in the past week could already have brought the disease into Australia.

“An emergency declaration the moment Indonesian authorities raised the alarm would have been an appropriate response because infected animals could have been carriers for two weeks before showing symptoms. More sniffer dogs won’t find the disease on people’s shoes.”