A recently launched University of Queensland initiative, The Animal Welfare Collaborative, has brought together more than 60 groups to work towards a shared goal—to make Australia a global leader in animal welfare. 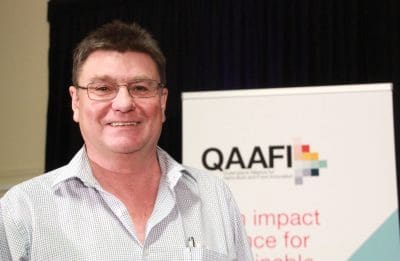 “We have embraced all, no matter their disposition on the use of animals, and have brought them all to the table to talk.”

“The strength of the Collaborative is that it is led by Australian universities and thus provides non-partisan independence, credibility, and scientific rigour, allowing us to lead initiatives with a clear focus on the animals,” he said.

“The Collaborative has a broad remit of animal species to cover, but the group’s initial focus is Australia’s animal production and horse racing industries, which have been the focus of public concern in recent years,” Professor Tilbrook said.

At a recent summit held in Sydney, the Collaborative brought together 60 organisations with a broad range of opinions to ‘custom build’ the Collaborative so that it becomes an efficient and novel instrument to achieve its goals.

Animal Health Australia CEO Kathleen Plowman said it was encouraging to see so many groups with a diverse range of views represented at the summit.

“The summit provided a respectful forum for discussion and debate, with everyone in agreement that providing animals with the highest level of welfare outcomes was the main priority,” said Ms Plowman.

Nearly two thirds of the organisations present at the summit voiced their enthusiasm for continuing to work together to make The Animal Welfare Collaborative a success.