The results were announced this morning at Mort and Co’s Grassdale Feedlot near Dalby where more than 800 head of prime cattle have been on feed for the premier competition. 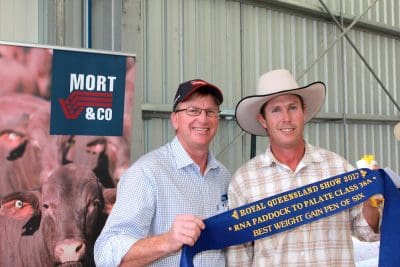 Atkinson Pastoral Company also won the highest individual weight gain for the 70 day-class with an Angus Droughtmaster steer producing an ADG of 3.94kg.

For the first time the long-running competition also included a 330 day Wagyu competition, with Stanbroke Beef winning the feedlot section with a pen of six F1 Wagyu cattle recording an ADG of 1.37kg. This Wagyu F1 entered by Stanbroke Beef produced the highest individual weight gain in the new Wagyu class with an ADG of 1.547kg.

Stanbroke Beef also took out the Wagyu class’ highest individual weight gain award with an F1 Wagyu weighing in with an ADG of 1.547kg.

Gyranda Pastoral Company’s winning pen in the 70-day class produced an ADG of 3.07kg. In addition to that win, Gyranda also took third place in the 100 day section, with a Santa Gertrudis pen producing an ADG of 2.982kg.

Win comes in grip of drought

Atkinson Pastoral Company is a family partnership comprising Rob and Donna Atkinson, their son John and his wife Bec, and their daughter Amy and her husband Guy Slack-Smith.

Today’s results are a resounding endorsement of the Atkinson’s decision in 2012 to introduce Angus bulls from Ian and Sally Vivers’ Eaglehawk Angus Stud at Glen Innes over some of their commercial Droughtmaster females in a bid to test the impact of Angus infusion on eating quality.

Their Hughenden property Katandra has been in the grip of severe drought for five years.

They have been forced to downsize their breeding herd from around 3000 females to 1500 during that time, with their herd scattered to agistment on about eight different properties at various points along the way.

Two years ago all of their breeders ended up on agistment 100km south of Bollon.

Their winning Angus/Droughtmaster cross steers were calves on those females at the time, before returning to Katandra where they were weaned. The Atkinson’s winning pen of steers in the 100 day section produced an ADG of 3.117kg.

The Atkinsons last entered steers in the RNA Paddock to Palate challenge 12 years ago, and when they saw advertisements calling for entries for the competition earlier this year they thought it would be a great way to test the impact of the Angus infusion and to compare their cattle with others.

They selected three pens of six steers, picking them with the help of DNA selection tools from Zoetis for eating quality.

The eating quality traits will be judged in the second stage of the competition, which involves MSA chiller assessments of all carcases and taste panel testing of the beef from all steers entered (Those results will be announced at the Ekka in early August).

With the strong focus in the breeding of these cattle on eating quality, Rob said that to win the weight gain section was a welcome surprise.

To win against some of the best cattle producers across Queensland and New South Wales has gone a long way to at least partly relieving the burden of ongoing drought.

“It puts shivers down my spine, it is absolutely unbelievable,” Rob said with an ear-to-ear grin this morning.

Mr Atkinson said he had initially been unsure about the ability of Angus bulls to handle Hughenden conditions but says he has been impressed by their performance. “They walked straight into a drought, they had a really rough initiation but they handled it, they got plenty of calves and did everything we asked of them,” he said. Mort & Co private client manager Berry Reynolds told the crowd of producers who toured the winning pens at Grassdale this morning that it was amazing what the Australian beef industry was achieving in continuing to lift the standard of its cattle.

“Throughout this competition we are seeing it progressively improving year in, year out,” he said.

“And it is just testament to Australian cattle producers and the beef industry as a whole.”

The Paddock to Palate Competition is the nation’s richest beef competition of its kind with $46,000 in prize money on offer. It’s a three phased competition comprising best aggregate weight gain over 100 days (70 days for trade); a carcass competition and an MSA eating quality competition. While the 2016/17 Paddock to Palate Wagyu Challenge, which features almost 100 head of cattle, is four phased comprising best aggregate weight gain; a carcass competition; carcass value and finishing in a beef taste off. The cattle that are part of the 2017/18 Wagyu Challenge are also currently in the feedlot.

The exhibitors who poll the highest aggregate score across all categories in both competitions are then awarded the overall prize, to be announced on the first day of the Royal Queensland Show (Ekka) at a special Awards Presentation Breakfast.

“The competition provides an opportunity for producers to benchmark their genetics and property management practices against like-minded beef cattle producers,” Mr Noller said.

“The high quality of genetics entered into the competition this year presented average daily gains higher than normal feedlot conditions, so we’re pleased with the results.

“While the Wagyu Challenge is the only breed specific competition we run – Wagyu is so unique with its characteristics for marbling that we’ve been able to create a whole competition for it.”