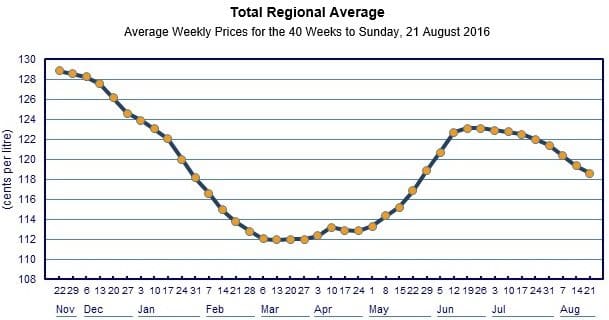 AFTER experiencing a rally since early May, regional and rural diesel fuel prices across Australia have again trended lower over the past six weeks, averaging 118.6c/litre retail on Sunday.

That price has fallen up to 6c/litre since our previous monthly diesel report in mid-July.

As the graph pictured above shows, retail diesel prices in regional/rural areas hit a 14-year low in March at around 112c/litre, but prices now appear unlikely to return to that level, the IEA says.

Biggest falls over the past month were seen in Queensland, NSW and South Australia.

The Australian Competition and Consumer Commission yesterday highlighted that retail margins on fuel are currently at their highest levels seen, despite the generally low petrol and diesel prices at retail.

ACCC’s latest report on the Australian petroleum industry shows that average petrol prices in 2015–16 were at their lowest levels since 2002. However, gross retail margins also increased to their highest levels, indicating that the full benefits of lower international crude oil and refined petrol prices are not being passed on to end-users.

The average price for petrol in the five largest cities (Sydney, Melbourne, Brisbane, Adelaide and Perth) in 2015–16 was 121.7c/l. This was the lowest annual average since 2001–02 in real terms (adjusted for inflation). Gross retail margins, the difference between retail prices and published wholesale prices, in the five largest cities increased by 1.2 cpl on the previous quarter, and averaged 11.2c/l in 2015–16, the highest level since the ACCC began monitoring them in 2002.

“Bowser prices for customers last year were the lowest they’ve been on average for 14 years, but this report suggests that in order for there to be more competitive pressure on retailers, consumers need to shop around and reward those offering the best-priced fuel.”