AUSTRALIANS spent a record $16.2 billion online in the year to October 2014, up 11.9 percent on the previous year according to National Australia Bank’s latest Online Retail Sales Index.

The lion’s share of the increase in online retail sales has come from domestic retail sales, as opposed to Australians shopping internationally. As the Aussie dollar has weakened, domestic online sales expanded by 14.4pc, while international sales only grew by 4.7pc. 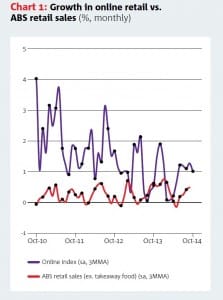 By sector, at 43.9pc, electronic games and toys had the fastest annual online sales growth in October — 6.7pc higher than the previous month. However, this category is considerably more volatile, due to effects such as the timing of electronic game releases.

The second highest annual growth rate is now in the homewares and appliances category where sales expanded by 22.1pc annually and 4.7pc monthly.

While online retail remains dominated by those aged between 35 and 44, older Australians are also experiencing solid growth. Over 65s have now seen positive growth in online shopping for 14 consecutive months, with spending rising a further 1.7pc in October, the fastest growing age segment for the month.

“Despite a recent pickup in the traditional bricks and mortar retail sector, it was still outpaced by the improvement in online retail growth over the past quarter,” he said.

“Department and variety stores continue to have the largest online market share. Electronic games and toys have been expanding rapidly, albeit off a small base, while sales from daily deals have virtually collapsed.”

“This latest report also shows the flow of money across geographies, with three-quarters of all online spending happening from NSW, Victoria and Queensland, but the highest per capita spending coming from Canberra. Why does this matter? Because it’s this kind of data that can help retailers target their growth strategies.”

What have been the growth trends for online retail?

Despite the out-performance by the online retail sector, its growth rates have been on a gradual decline from the double-digit growth rates experienced in previous years.

Who are the big spenders?

Online spending remains dominated by those aged between 35 and 44, however, the uptake of online shopping by older Australians has been encouraging. The monthly growth in online spending by those 65+ has been positive for 14 consecutive months, with spending rising a further 1.7pc in October, the fastest growing age segment for the month.

Spending by age – While all age groups spend most at Department and Variety Stores, significant differences were apparent by age across other categories. Those aged 18-25 spend more on Fashion and Media while those aged 35-44 and over 65 spend heavily on Groceries and Liquor.

Regional to metro sales – Metropolitan residents bought 71pc of online purchases in the past year and spent 7pc more on average than those residing in regional Australia.

Share of state spending – Residents of NSW, VIC and QLD spend more online but ACT residents have the highest per capita spending, followed by NT, WA and NSW. On the other hand, those in QLD, VIC and SA were spending less than the national average.