Nominations will open next month for a new trans-Tasman award targeted at cultivating the next generation of agri-business leaders.

Livestock industry networking collective, the Platinum Primary Producers (PPP) Group, has initiated the award in remembrance of one of its members, the late Zanda McDonald.

Mr McDonald was a prominent identity in the Australian meat and livestock industry and a foundation member of the PPP group. He died in April last year at the age of 41, following a tragic accident on his Queensland cattle property. Click here to see an earlier Beef Central salute to Mr McDonald. 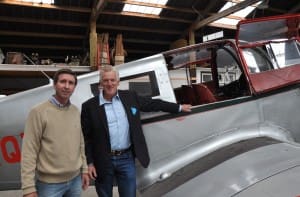 The late Zanda McDonald, left, and PPP chairman Shane McManaway shared a common interest in aviation. Click on image for a larger view.

PPP chairman Shane McManaway said the award was born out of mateship and respect for one of agriculture’s natural leaders.

“Zanda was one of life’s true inspirations and true gentlemen. He was an astute businessman and yet equally at home driving stock or fixing machinery. A devoted father and husband, he achieved great things in a short space of time. He did this with quiet determination and a natural instinct for doing the right thing,” Mr McManaway said.

Applicants for the award will need to demonstrate, via a 500-word submission, how they exercise Zanda-like traits in areas like leadership, passion, innovation, motivation, dedication, determination, curiosity, work ethic and a desire to improve their industry.

Applications are invited from individuals aged 35 or under. The PPP Group will also invite third-party nominations from the agri-business sectors in Australia and New Zealand.

Six applicants will be shortlisted to attend interviews and three finalists will be invited to present their submissions at the 2015 PPP conference in Australia, scheduled for next March.

The winner will be selected and announced at the conference and will take away with them the Zanda McDonald Award trophy and a tailored sabbatical and mentoring package that will help them enhance their current work and/or projects.

“The Zanda McDonald Award is an exciting initiative for agri-business in New Zealand and Australia,” Mr McManaway said.

“This is a prestigious award in honour of a great man. We hope it will encourage our future leaders to step forward and show us what they’re worth.”