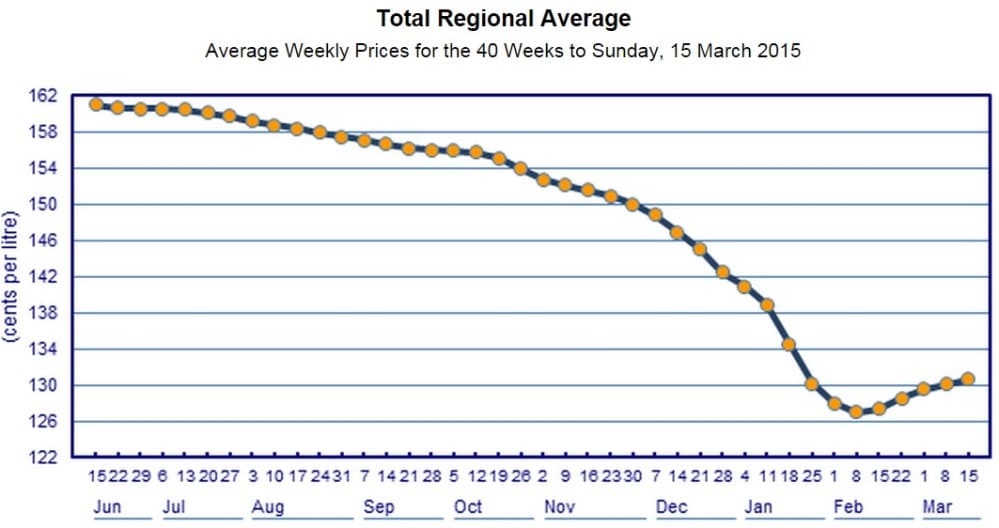 DIESEL fuel prices across regional and rural parts of Australia have turned the corner, edging higher again after sustained declines over the past six months.

The Australian Institute of Petroleum’s weekly report suggests prices for diesel in regional areas of Australia averaged 130.6c/litre for the week ended Sunday, 15 March – a modest rise from around 127c/litre a month ago, but still down almost 20c/litre on prices seen as recently as three months ago.

This week’s price is almost 30c/litre better than the recent peak in July last year when the average in rural areas of Australia was above 160c/litre.

World oil prices have started to stabilise in February after plummeting towards the end of last year, as rising oil supplies clashed with weak international demand in China and Europe.

What’s behind it? A global oversupply of oil, driven by strong production of American shale oil, has pushed oil prices lower over the past six months. OPEC members, which produce 40pc of the world’s oil, have responded to this new competition by maintaining their production levels, causing prices to plummet.

In refusing to curb production levels, which would offset global oversupply, OPEC members hope to push prices low enough to put new producers out of business, eliminating the competition.

Lower energy demand from major markets has compounded the issue of oversupply by decreasing demand for oil.

The latest Australian Institute of Petroleum survey shows that based on current average diesel price for regional/rural areas of Australia, filling a Toyota Landcruiser 200 series (138 litres, main and auxiliary tanks) today would cost more than $43 less than the same fill this time a year ago, and $25.40 less than in late November.

All states and territories lifted a little in price this month, with the biggest rises seen in the Northern Territory, Queensland and Western Australia.