Not surprisingly, given the surge in the cattle market over the past six months, RCS’s Profit Probe producer benchmarking exercise has shown a 14-year high for Return on Assets (ROA) in trading cattle values for the 2014/15 year.  But on the flipside, Cost of Production (CoP) has risen 16pc. In this contributed article, RCS general manager David McLean* discusses the key findings, and draws some conclusions…

THE 2014/15 financial year saw an unprecedented shift in cattle prices across Eastern Australia, as shown below.

We’ve all seen the graph trend before, however it’s worth revisiting it again to see how far above previous levels the price really is. 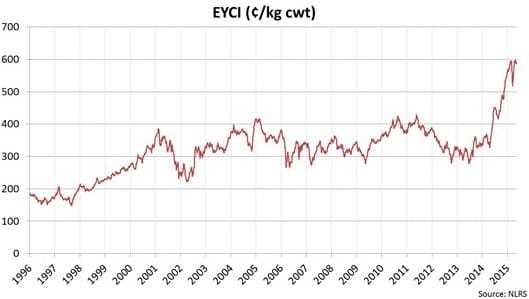 In the RCS benchmarking program, Profit Probe*, this massive increase in trading cattle values for the 2014/15 financial year has given the economic gross product for beef businesses a big boost.

The outcome is the highest return on assets (ROA) seen in Profit Probe since 2000/01.

The Top 20 percent group (illustrated in green in the graph) saw a 12.7pc ROA while the group average (blue bars) was 4.7pc. This spike in economic performance has brought the three-year average (black line) up to 6.5pc for Top 20 percent of operators, and 1.9pc on average. 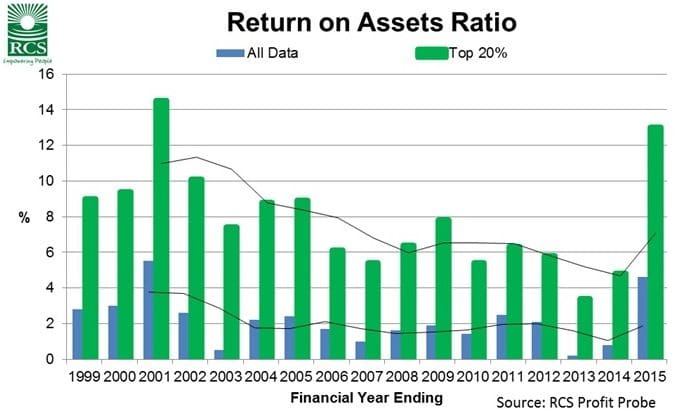 The high economic gross product also resulted in the RCS Three Secrets of Profit looking like a case study example for the Top 20 percent group, in the table below.

How much of these handsome results are due to the increase in cattle inventory? The answer is, quite a lot. 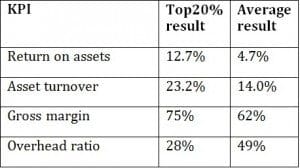 However I would suggest a better question to ask is: “What will my results look like when the cattle prices stay static, or drop?”

Nobody can predict cattle prices. I personally cringe when I hear people make the statement, “Cattle prices are finally where they should be!”

Sometimes it is said in jest, but regardless, this indicates that the focus is not on what can be influenced in a business. Within every benchmarking or analysis group, there is a variation in price received, however there is an insignificant correlation between price received and return on assets, within any group.

In other words, those businesses being paid more per kilogram of beef were not necessarily generating a higher return on assets.

CoP is a critical indicator of potential profitability, and definitely an indicator of business resilience.  Unfortunately only a small proportion of industry stakeholders know what it truly costs them to produce a kilo of beef.

I like the CoP figure, as it allows us to focus on the business without the distraction of prices. There are three main reasons for this jump:

It’s the third of these items that is concerning. This period of higher prices presents the opportunity for higher gross margins to be generated. Just as well, because overheads costs continue to increase.

What to do with any increased profits?

Every producer should have a strategic focus on what to do with any increased profits.

Is it debt reduction, targeted capital works or investment on farm, investment off farm, expansion, holidays/fun?  If you haven’t had a business discussion around this topic, then I strongly encourage you to do so.

Finally, rural debt. There’s a lot of it. Interestingly Profit Probe shows the Top 20pc of producers have a lower equity ratio (70pc) than those businesses generating average results (77pc).

This is common in our experience. The graph below shows that across the years, there isn’t a lot of difference in the debt owing per LSU managed. What is different, is how borrowed funds are used and what the capacity of the businesses is to service and repay debt. Borrowing money has to be a strategic decision, carefully considered and planned. 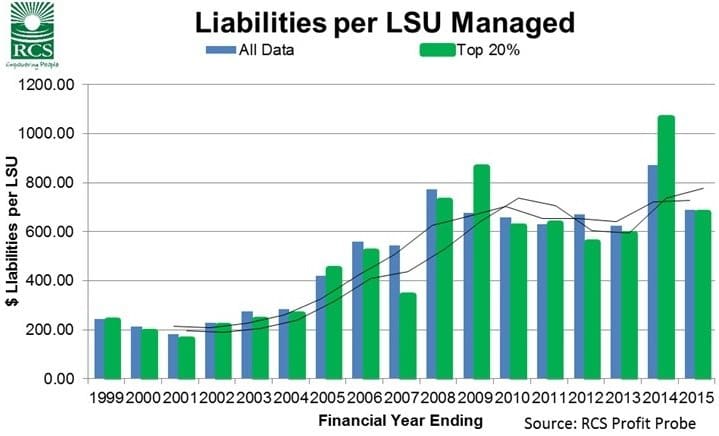 It is no coincidence that those businesses which consistently sit in the Top 20pc of profitability are very holistic, professional managers (& have worked hard to become this type of manager).

The beef industry is in a nice position. Hopefully we see some widespread rain this season to boost those doing it tough. The reality is that seasons and prices will vary, but we must professionally manage these conditions to have a successful business.

* David McLean is general manager of Resource Consulting Service (RCS). He can be contacted on 1800 356 004, info@rcsaustralia.com.au