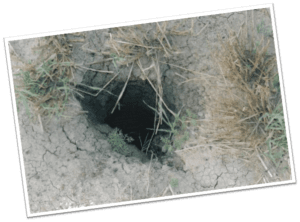 Research in the United States has renewed concerns about the potential for abandoned, uncapped exploration wells to provide pathways for methane gas to leak into groundwater supplies and the atmosphere.

It follows warnings from an experienced water bore driller that thousands of unsealed exploration holes are likely to cause uncontrolled gas leaks if not rectified before coal seam gas production begins on mass-scale in Southern Queensland and northern NSW.

A Princeton University study released last week said there are between 280,000 and 970,000 abandoned oil and gas wells in Pennsylvania, one of the oldest oil and gas producing states in the US, and a region where hydraulic fracturing techniques have been in long-term use.

Study author, Princeton PhD student and civil engineer Mary Kang, said abandoned wells can serve as leakage pathways for methane, brine, and other fluids from deep subsurface formations to migrate into shallow groundwater aquifers or to the atmosphere.

Ms Kang measured methane emissions from 19 abandoned wells in northern Pennsylvania and found that the wells were leaking on average about 96 cubic metres of gas each year.

The study said abandoned wells were likely to account for between 4-13pc of man-made methane emissions in Pennsylvania, a source previously not accounted for.

Cornell University ecologist and methane expert Robert Howarth told independent Canadian media service The Tyee that Ms Kang’s study was important because it showed that emissions from oil and gas activities were much higher than the government and industry had estimated.

The problem of leaking abandoned wells had not been well studied in the past, he said, and was not considered by the US Environmental Protection Agency in in its greenhouse gas emission estimates.

“It is yet one more example of how little we really know about methane emissions from the oil and gas industry, and yet one more reason to believe that the EPA has been severely underestimating the total emissions,” Dr Howarth said.

In October last year a water bore driller with 35 years experience in the Great Artesian Basin region warned that if CSG developments continue as planned without immediate work to seal the ‘countless thousands’ of unsealed test holes that lie across the region, inland Queensland could be facing an “environmental disaster”.

Ian Hansen said open, unsealed exploration holes provided pathways that would lead to uncontrolled volumes of gas leakages and the depletion of aquifers as more water is removed from coal seams to release trapped gases.

In recent years landholders have also raised concerns about the sudden appearance of gas bubbles along a five kilometre stretch of the Condamine River in close proximity to coal seam gas fields near Chinchilla.

In western Queensland the Maranoa Regional Council was recently forced to close the Wallumbilla township’s main freshwater bore after testing found it contained escalated levels of gas, and is currently working with the Queensland Government to ascertain the likely source of the gas, which it believes could be linked to an old water bore/gas well.