AVERAGE saleyard prices of cattle are expected to fall by 15 percent to average 455c/kg this year, ABARES says in its March quarter outlook released today.

The reduction in value mainly reflects lower meat prices in major export markets, particularly Japan and the US where Australian beef continues to face increased competition.

Between 2018–19 and 2020–21 strong competition in major export markets and, assuming average seasonal conditions, an expansion in Australian cattle supply are expected to exert downward pressure on Australian saleyard prices, ABARES says. Prices are expected to rise by 2021–23 when growth in world supplies slows, particularly in the US, placing upward pressure on world beef prices.

Here’s a summary of ABARES short and medium term projections:

Expansion in cattle herd to slow

Over the medium term to 2022–23, ABARES expects the Australian beef cattle herd to expand by 4pc from today’s population to around 25 million head.

This is expected to constrain growth in cattle numbers, particularly in northern Australia, where seasonal conditions have also restricted rebuilding in recent years.

Australian beef production is forecast by ABARES to rise in 2017–18 by 8pc to 2.2 million tonnes (carcase weight), driven by a 4pc increase in cattle slaughter.

Most of this increase is expected to be from female cattle as falling average prices for manufacturing beef provide producers with an incentive to consolidate breeding inventories.

Manufacturing beef prices are projected to continue to decline to 2020–21. This is expected to provide producers with an incentive to turn off cows and heifers that would otherwise be retained for herd expansion.

This projected increase in turn-off is expected to drive beef production to a peak of around 2.4 million tonnes in 2020–21. Medium term, support for manufacturing beef prices is expected to reduce cow and heifer turn-off by 2021–23. However, this is projected to be offset by rising carcase weights, driven by low feed costs and a large number of cattle on feed. As a result, Australian beef production is projected to remain at around 2.4 million tonnes to 2022–23.

Value of exports to rise

Export prices are projected to decline over the medium term, mainly as a result of strong competition from US beef in major export markets. Competition is also expected to increase from South American beef exports to China, but animal disease issues are likely to continue to restrict their entry to the high-value markets of Japan and the Republic of Korea.

US import demand to remain weak

US feed costs are projected to remain low over the medium term and provide US producers with an incentive to increase the number of cattle on feed. Between 2017–18 and 2019–20 this is expected to result in rising US beef production, placing downward pressure on US beef prices.

Between 2017–18 and 2022–23, US beef exports are expected to rise despite projected lower production in the latter half of the projection period. Domestic beef demand is expected to be relatively weak as a result of consumers substituting beef with chicken and pork.

US exports are expected to account for an increasing share of production as a result of strong demand in export markets. In 2017 US exports accounted for a record 11pc of production (around 900,000t). Of this, 50pc was shipped to Japan and the Republic of Korea. 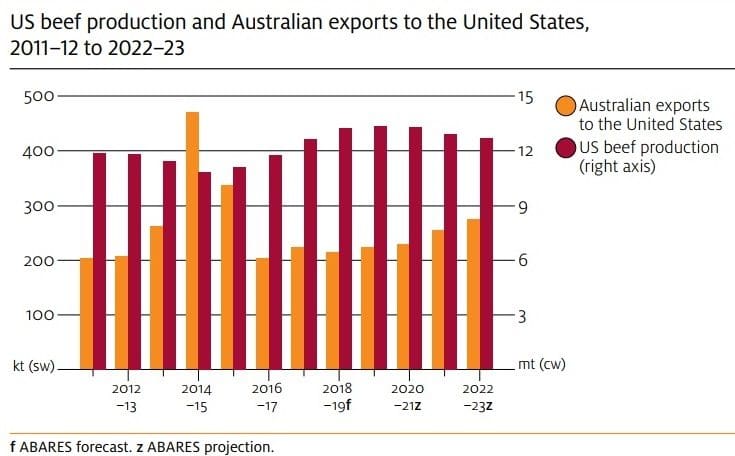 Forecast lower world beef prices are expected to support an increase in Japanese beef imports, mostly of US chilled beef. In the first half of 2017–18 the chilled beef indicator price (chilled grassfed fullset) was 8pc lower year-on-year while Japanese imports of US beef were 20pc.

Over the medium term, Japanese demand for imported beef is projected to remain relatively weak due to slowing income growth and an ageing and declining population. Strong competition from US exports is expected to limit growth in Australian exports of chilled beef.

ABARES anticipates Australian beef exports to Korea to decline by 7pc to 167,000t in 2017–18. This reflects increased competition from the US in the chilled market and reduced demand for imported beef as a result of strong competition from pork.

Over the medium term, Korean demand for Australian beef is expected to remain weak. Relatively slow income growth is expected to reduce average annual growth in per person beef consumption to around 1pc, down from the five-year average to 2017 of 2.2pc.

Most of the projected increase in Korean beef consumption is expected to be supplied by local production as a result of the Korean cattle herd expanding by 8pc to around three million head. This is expected to reduce Korean demand for imported beef for which Australia will be facing increased competition from US exports. Australian beef exports to China in 2017–18 are forecast to increase by around 17pc to 122,000t. This reflects strong growth in demand for beef in China, which continues to outpace growth in supply.

Between 2018–19 and 2022–23 Australian beef exports to China are projected to grow strongly at 5pc per year to reach 158,000t. This is mainly the result of strong Chinese demand for imported beef and an increase in exportable supplies from Australia.

Prices for Australian beef to China are projected to decline over the medium term as a result of lower world beef prices and increased competition from other exporters. China is expected to expand the number of suppliers from which it imports beef and increase imports from already established suppliers such as Brazil.

In 2016 China imported beef from 13 markets, double the number five years earlier. The US was the most recent addition, after trade resumed with small volumes in June 2017.

Almost all of the forecast increase is expected to go to Indonesia, Australia’s largest market for live cattle.

In contrast with trade sources, ABARES suggests import demand in Indonesia is strong, supported by growth in incomes, population and urbanisation, as well as a growing preference for diversified diets.

Constrained growth in Indonesian beef production is also supporting import demand because strong prices provide local producers with an incentive to maintain a high rate of turn-off, restricting growth in the Indonesian herd. Over the medium term, Australian exports are projected to remain at around 900,000 head. Exports are expected to increase to markets other than Indonesia, including Vietnam and China. This will help Australia’s live export industry to diversify away from single market dependency, and related exchange rate and market access risks.

Despite diversification, Indonesia is projected to remain the largest market for Australia live feeder slaughter exports and account for around two-thirds of exports in 2022–23.

Indonesian import regulations pose a key downside risk for the Australian live export industry, ABARES said. The Indonesian Government introduced policy measures in September 2016 aimed at reducing domestic beef prices. This includes a policy requiring one breeding cow to be imported for every five feeder cattle in the two years to 2018, equivalent to 18pc of all live cattle imports.

Importers unable to comply with the policy may have licenses suspended for one year. According to the Australian Department of Agriculture and Water Resources, breeding cattle accounted for just 2.9pc of live exports to Indonesia in 2017.

To meet the current Indonesian requirements, Indonesian feedlots would have to import a large number of breeding cattle in 2018. Live exporters would be required to compete with relatively strong restocker demand in Northern Australia. This would provide strong support for live cattle prices and place upward pressure on beef prices in Indonesia.