This line of 78 Hazeldean blood Angus weaner heifers from the Monaro district’s Read family, South Lanyon, near Canberra, weighing 219kg, made $985 or 450c on Friday.

A LARGER AuctionsPlus sale catalogue of 6300 head on Friday produced some outstanding near-record results for younger cattle, while cows and calves sold to a top of $2305 per unit.

Steers again cleared 300c/kg and only a handful of heifers fell short of the 300c mark.

In a breakdown of Friday’s regular AuctionsPlus catalogue by weight range:

Highlights came from the lighter, younger lines of cattle with some outstanding prices including a line of 78 Hazeldean and Rosskin blood Angus weaner heifers from the Monaro district’s Read family, South Lanyon, near Canberra, weighing 219kg, making $985 or 450c. Outside a run of lightweight weaned calves (94-134kg) sold out of droughted Central western Queensland at the end of August, this was the highest price ever seen on AuctionsPlus for weaner heifers carrying any reasonable weight.

In other red-hot heifer weaner results on Friday, a line of 243kg Angus heifers at Coolac hit 440c/kg, and lighter 159kg Hereford heifers at Uralla made 402c. The previous highest c/kg liveweight heifer price was recorded on AuctionsPlus for heifer weaners was 389c.

The half-sib brothers of the Read family’s South Lanyon heifers mentioned above, totalling 111 head weighing 235kg, also made their mark on Friday’s sale, making 440c or $1035 when bought by a repeat buyer chasing known performance. That price was also only exceeded by a pen of lightweight weaned steer calves (94-134kg) sold out of necessity out of the droughted Blackall district in August. The previous high-point for  steer weaners was 439c on October 16 for a pen of 195kg 4-9 month old Angus steers, and prior to that a pen of Walcha steers which made 431c/kg in early September held the record. 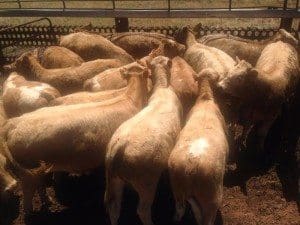 Top price for breeders went to these Shorthorn cows and calves from Pleasant Hills in the Riverina, three years weighing 558kg, with Charolais calves at foot, making $2305.

The sale also saw a line of dairy steers from Thallon in southern Queensland 7-19 months old, averaging 352kg, making a solid 253c or $890.

Top price for breeders went to a line of Shorthorn cows and calves from Pleasant Hills in the Riverina, three years weighing 558kg, with Charolais calves at foot with an average weight of 268kg, making $2305.

A large line of 115 first-calver Angus cows with Angus calves at foot of Millah Murrah blood from Moree, made a whopping $2275 which gave the lot a total value of more than $261,000.

In specialised categories, Wagyu-infused entries again attracted wide support on Friday, with a line of 17 Wagyu x  Angus F1 steers from Goulburn weighing 254kg making an impressive 627c/kg liveweight or $1595, while their heifer half-sibs weighing 236kg made 607c. The steer price was the highest ever seen on AuctionsPlus for non-Fullblood Wagyu feeders.

Proving just how fickle the cattle market can be at times, the same cattle were offered on AuctionsPlus a week earlier, and failed to raise a bid when offered at around $200 less than the price paid on Friday.

Friday’s strong Wagyu result followed a special WA AuctionsPlus cattle sale last Monday, where lines of Fullblood Wagyu out of Oldbury and Tooday in WA’s Midlands region sold to an Eastern States buyer with an estimated freight bill of $300/head. The freight bill took the total value of the stock to 740c/kg.

Included in the offerings were pens of weaned Fullblood heifers 5-7 months and averaging 177kg and 154kg, which sold for $895 and $775 respectively.

Working dogs to $9000 in near total clearance

Showing the versatility of the AuctionsPlus online marketing platform, Thursday also saw the 4th Annual RMA Dundee Working Stock Dog auctions, which attracted a total of 21 lots from across NSW.

The sale had a clearance of 20 out of 21 lots selling after the AuctionsPlus online catalogue received 9361 hits, with 256 bidders logging into the pre-auction bidding and live sale. The top price dog was Kanika Croc, selling for $9000, and the sale had an average of price of $4171.