Heifers less than 200kg ranged from 362c to 573c this week to average 483c. Top price was for this line of Santa unweaned heifers 4-6 months averaging 162kg from Alice Downs Grazing Co, Blackall, QLD. They will be making the 1100km journey south to Dubbo, NSW.

Weaners and yearlings accounted for more than 17,000 or three quarters of those listings across the two young cattle sales this week, with cattle offered from northern WA all the way to Tasmania.

All young heifer categories, and most weaner and yearling steers, lifted in value again this week.

Clearance rates were strong with 77pc clearance in the first weaner & yearling sale, and 88pc in the second. The Eastern States sale was slightly down with 52pc clearance this week.

Cows and calves ranged from $1760 to $3275 this week to average $2638. Top price went to a line of 4-6-year-old Angus proven breeders, PTIC back to Table Top Angus bulls and with 6-7 month old Angus calves at foot. The cows were listed by S & P Grazing from Talgarno, VIC.

PTIC cows ranged from $1330 to $2630 this week to average $1809. Top price was for a line of 4-7-year-old Poll Hereford proven breeders from Sevenbardot Partnership, Condobolin, NSW. They will travel a short distance to Lake Cargelligo, NSW to calve their Poll Hereford calves.

PTIC heifers ranged from $1320 to $2685 this week to average $1777. Top price was for a line of rising two-year-old Shorthorns from Cumnock, NSW bred by vendors LV & SM Job. The heifers were PTIC to Speckle Park bulls and will be calving in their new home at Bylong, NSW.

Heavy heifers +400kg sold from 339c to 402c to average 376c. Top price was for a line of 15-17-month-old 410kg Shorthorn future breeders from Padthaway, SA, bred by vendors Carlton Nitschke Investments. These girls will be heading east to the NSW/VIC boarder near Albury/Wodonga. 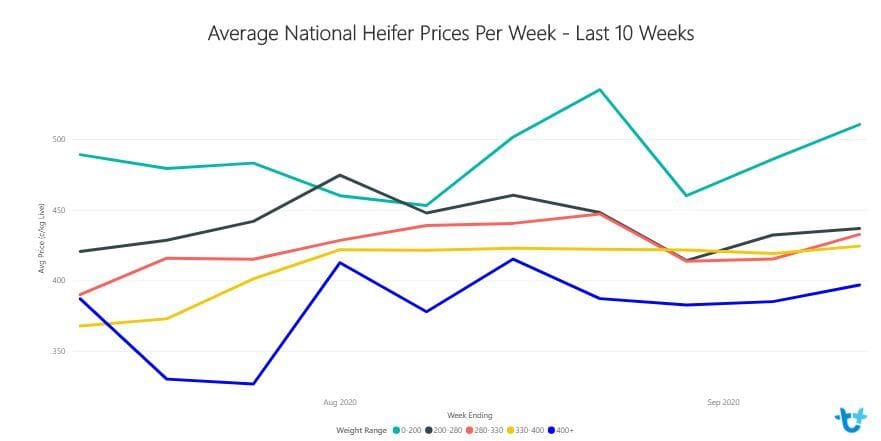 Steers less than 200kg sold from 487c to 557c to average 522c. Top price was achieved by Alice Downs Grazing Co which also achieved top price for heifers under 200kg. These unweaned Santa steers from Blackall, QLD were 4-6 months averaging 169kg making $940 or 557c/kg. The steers are headed with their sisters travelling 1100km south to Dubbo, NSW.

Steers 330-400kg sold from 352c to 456c this week to average 414c. Top price was returned by a line of 11-12-month-old black baldy steers averaging 341kg from Culcairn, NSW listed by vendors Wilksch Partners. These steers will head across the border to Corryong, VIC.

Heavy feeder steers greater than 400kg sold from 368c to 427c to average 405c. Top line was a quality listing of 12-13-month-old Hereford steers averaging 422kg listed by Barry & Faye Hicks from Gundowring, VIC. They made $1805 or 427c, and will be staying within Victoria. 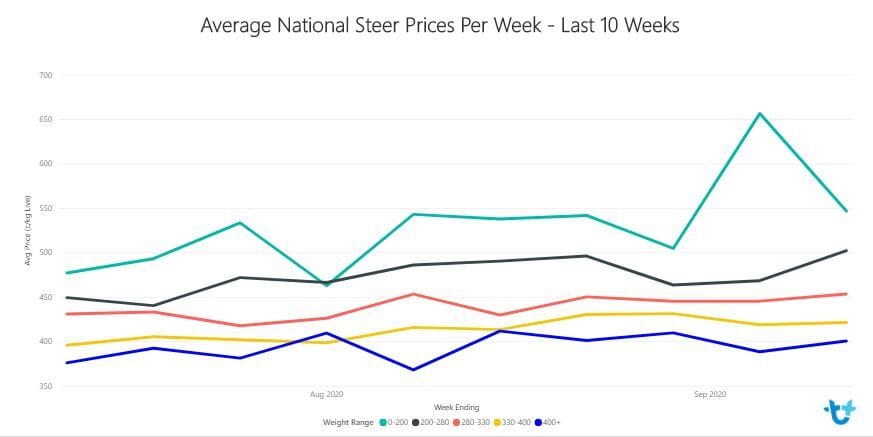 Across the water in Tasmania this week saw a spike in listings to total 578 head on offer. Clearance remained high with 99pc achieved on the island and strong prices across several stock categories. Weaner and yearling steers made up the bulk of the catalogue with 283 head listed, selling from $1000 to $1720, averaging $1303. RW & M Spillane from Beulah offered the top priced line with 13-15-month-old 410kg Poll Hereford backgrounder steers. 225 weaner and yearling heifers were offered selling between $890 and $1570, averaging $1199. A line of 13-14-month-old Angus/Poll Hereford yearling heifers offered by Pisa Estate secured top price, averaging 423kg.

More than 110 registered bidders drove stiff competition with the purchased stock travelling across NSW and Victoria to Berrima, Wangaratta, Shepparton, Narrabri and Guyra.

Other highlights from the sale included:

FarmGate Auctions has held 23 auctions over the past 11 months and will hold a first anniversary sale on 9 October. This line of 81 Angus heifer weaners 6-8 months made 644.84c/kg, while another 90 of their brothers made 629.78c/kg on the FarmGate Auctions online sale yesterday – both offered by AM & LV Doolan, Coonabarabran.