Wodonga cattle prices dip on the eve of the Mountain Sales Comprising 1398 head and within only a small handful of volume orders participating, the market drifted to average $50 to $80 a head or 20-30 cents a kilogram lower than the companies’ previous month-earlier sale.

“The few feature lines we had sold as was expected, Mr Shea said. However, throughout the rest of the market there were opportunities”.

And, with the East Gippsland Mountain calf sales set to commence early next week (March 8) Mr Shea said he assumed a number of volume orders that would normally have attended the sale may have waited for the larger opportunities being offered there.

Nutrien P&S auctioneer, Will Jennings said the few cattle penned possessing the right weight and with good bloodlines still sold well and buyers that were willing to “poke” through the market found plenty of opportunities within the smaller lots.

The market’s leading price of $4480, was paid for a pen of six Angus heifers, Reiland blood that had 1–2-month-old Angus calves at foot.

These were offered J&K Reynolds, Big Springs, Wagga Wagga, NSW with a second of Angus-Hereford heifers, with similar calves at foot made $4320 per outfit for the same vendor.

These were offered by Schoen Pastoral, Corowa, NSW,  while Sunland Ag sold pens of mixed age Angus cows (457kg), PTIC 70-days on an October to December joining, at $2440.

Watch the vision of the female sale:

The Teys Jindalee Feedlot was an active player accumulating a number of small pen lots. 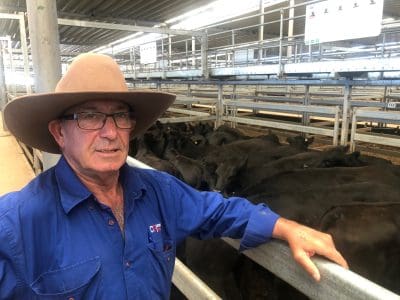 Large well-bred pens of weaners were quickly set upon by the volume orders. 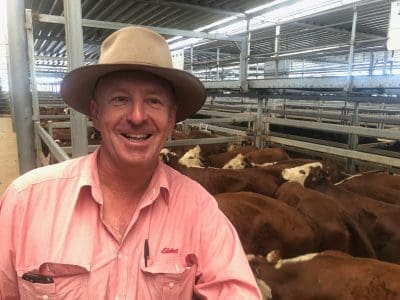 Western NSW, vendor Nigel Scott consigned a truck of vendor-bred Hereford steers from his north of Balranald property at Claire.

The market for heifers to feed was mostly set on a rate of about 500 to 580c/kg, with those selected as future breeders at times pushed higher.