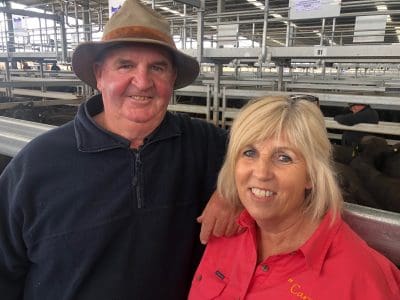 The old saying goes “when the circus comes to town it is a must to have a seat in the tent in the fear of missing something special”.

And that saying rang true at Ballarat on Friday when a massive 5454 steer-only yarding met unprecedent demand.

In a yarding that was chocked full of quality and offered heaps of weight, a determined body of buyers dispatched cattle as far north as southern Qld for feeding on grain, and more broadly, across south eastern Australia for finishing and backgrounding on grass.

However due to the enormity of the planned yarding a number of regular vendors admitted not tendering their stock due to the end-of-January easing in the market and consequently went home disappointed.

Likewise, plenty of wanted-to-be-buyers also went home disappointed unwilling to meet the demands of market that rebounded strongly to track the very best of the rates achieved in the spring. 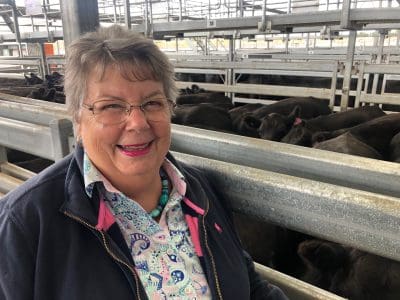 Veteran Ballarat agent Leo White, TB White and Sons, said the quality of the breeding and the weight that was offered across the entire yarding was the best that he had seen in his time at the central Victorian market centre.

“It is a reflection of both the bull power our vendors have invested in and the string of good seasons we have had in these parts, Mr White said.

It was credit on both accounts, Mr White said and the buyers bid accordingly.

Typical of Ballarat sales, a sizeable selection – about 140 pens- of grown steers, aged 15- 24 months, were represented in the yarding.

Buoyed by favorable winter forward contracts, a large percentage of the heaviest steers were returned back to grass as the fear of not having market-ready cattle to sell later in the year grows stronger.

Major northern feeder operators Mort & Co, Rangers Valley, Teys Wagga Wagga, J&F (JBS) along with Thomas Foods (SA) were the principal drivers of the feeder demand while the heaviest end of the yearling-off and weaner pens experienced a more modest 3-10c/kg lift of $10-$40 a head.

The highlight of the sale, Mr Nicholson said was the weight and depth in the quality of the breeding that saw barely a steer sold for less than $2000 a head.

HF Richardson auctioneer, James Haddrick agreed that in pockets, some spring sales may have been dearer but not by much.

“(The sale) opened up very strongly and continued all the way through for all a handful of pens to sell under $2100” Mr Haddrick said.

The demand displayed a lot of confident, Mr Haddrick said.

“A lot of cattle will be trucked north of the border through commission buyer orders, some went to South Australia while the Mort & Co order supported all sections of the sale buying both black and Euro-colored feeders and mid-weighed weaners to background”. 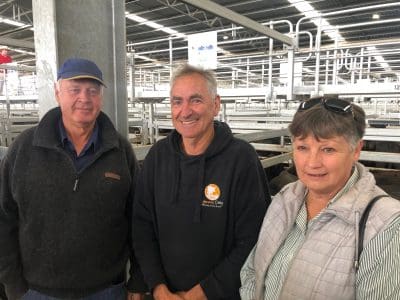 Dunnstown neighbour, Ray Barber and Richard and Jill Glenane compared notes after each sold Angus cattle in the buoyant market.

“Not even the great Roma saleyards, which is the mecca of central Qld cattle sales, could match the depth of quality offered here today,” Mr Burton said.

“We’ve secured 18 decks of the wonderfully-bred cattle, some of which will go onto feed in our main Qld lot for specialty orders, some will go for feeding in a southern NSW lot and others will be backgrounded on grass in central NSW” he told Beef Central.

The weaner run, which contained a large number of first-draft yards that exceeded 400kg was commenced on a pen of 28 E & A Stephens & Sons Angus weighed at 408kg. 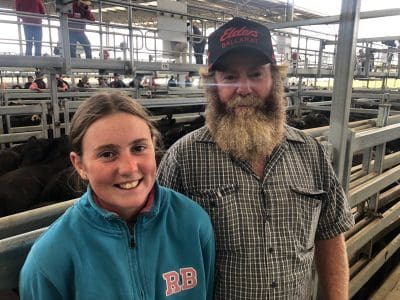 The 5454-head market, which was the third in its annual February series, was completed within four-hours by selling agents TB White & Sons, Elders, HF Richardson, Charles Stewart and Nutrien Ag.

Nutrien Livestock will this Friday, February 25, conduct its own stand-alone 49th annual sale where another 5500 grown steers and heifers and mixed sex weaners have been nominated.