BOTH PTIC heifers and cows surged strongly in price in an 11,800 head AuctionsPlus offering this week.

Cattle from the North West Slopes and Plains of NSW and Southern QLD accounted for the largest portions of listings for the week with 1900 and 1500 head respectively. Demand came from the Central West again this week with 1500 head travelling to the region.

There was a decreased offering of steers this week with 3705 head on offer, 836 head less than last week. Despite the reduction, demand remained strong, achieving a 93pc clearance.

Feeder steers 330-400kg sold from 382c to 482c this week, averaging 437c, rising 7c. Quamby Plains from Hagley, TAS offered a line of 11-12-month-old Poll Hereford steers averaging 361kg which topped the category, and will remain on the island.

Weaner and yearling heifers saw a slight increase in listings this week with 4700 head on offer, 57 more than last. Young heifers were in high demand with a 93pc clearance achieved for the category.

Heifers 280-330kg sold between 369c and 644c, to average 449c, on par with last weeks’ average. GJ & SL Rogers from Ballarat, VIC, who topped the PTIC cow section this week, also offered the highest priced lot for this category, with a line of 12-13-month-old Red Angus heifers averaging 320kg. 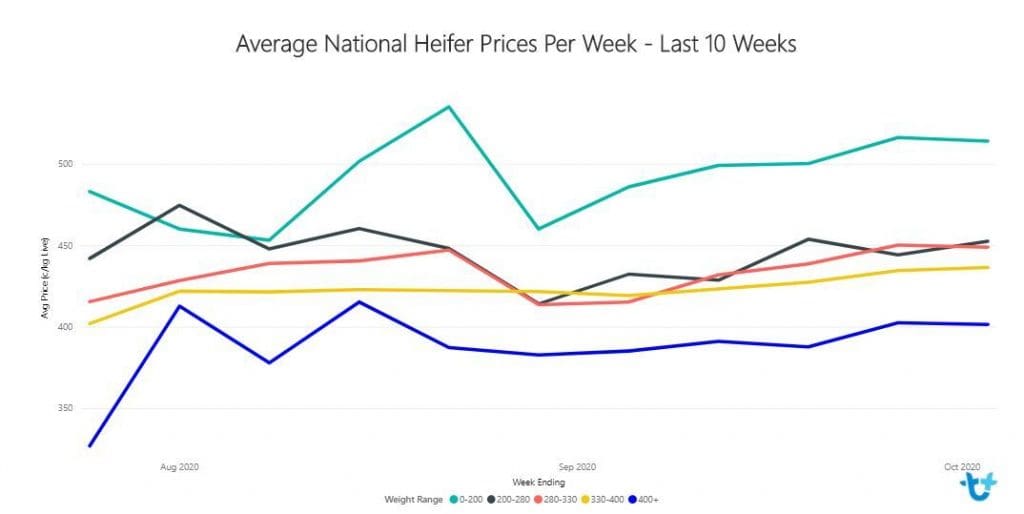 Looking across the Bass Strait to Tasmania, a competitive sale resulted in a 99pc clearance among the 572 head offered. Weaner and yearling heifers sold from $860 to $1790 and averaged $1329. Offered by WR Baxter & Son, Greenside at Pipers River, a line of 12-13-month-old Angus NSM future breeder heifers secured top price. These 375kg heifers had Landfall Angus blood and will remain on the island.

191 weaner and yearling steers were offered, achieving a 100pc clearance for the category, selling between $720 and $1750, averaging $1357. Top price went to a line of Angus and Angus cross trade steers 13-14-months averaging 497kg offered by JM & D Targett at Springfield.