This line of 52 weaned Angus steers 6-7 months 199kg made a new AuctionsPlus c/kg record of 841.3c/kg this week, returning $1590/head. They were part of a line of 173 weaned steers sold as part of a normal autumn turnoff from Cumberoona, Bowna, NSW.

PRICE trends were mixed in young cattle trading on AuctionsPlus this week, with records re-set for weaned steers, but some lighter heifer categories sharply down, losing the previous week’s gains.

Unrelenting demand continues to underpin young cattle prices and supply in general. Throughput this week totalled 18,203 head – up 2pc on the previous week.

While the latest three-month rainfall outlook from the Bureau of Meteorology points to a continuation of the favourable conditions for many key cattle producing regions, there remains large areas of central Queensland that have only registered patchy falls throughout the summer wet season. While the flow of cattle out of these regions has been quickly soaked up by southern producers, many finding a home in northern NSW, any significant rain across these Queensland regions over the next month would only exacerbate the already extremely tight market.

At the other end of the steer weight spectrum, heavy feeders +400kg averaged 13c/kg higher this week, at 560c/kg. The category peaked at 556c/kg ($2830/head) for a line of 31 Wagyu x Angus F1s, 22-23 months averaging 536kg from Derrinallum, VIC. They carried desirable Te Mania dam-side bloodlines and sired by Sumo Cattle Co Fullblood Wagyu bulls, and were offered in a broad weightrange from 432kg to 590kg. Heifers less than 200kg slipped 32c/kg on average this week,, while the three heaviest heifer categories were either steady, or slightly firmer.

One of the heifer highlights this week was a line of 66 weaned Angus heifers out of the Hunter Valley in NSW. Averaging a little less than 300kg, the 9-11 month olds sold for $1960/head. 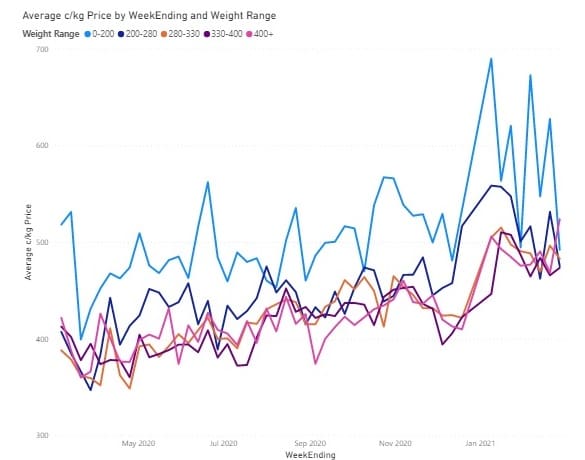 Heifer prices, AuctionsPlus for past 12 months

This week’s cow market recaptured some of last week’s gains, with PTIC cows with CAF averaging $276 higher, at $3014/unit – with a 73pc clearance rate. This week again saw some excellent lines presented, with a market high of $4720. PTIC heifers averaged $178/head higher, averaging $2301 – with a 57pc clearance rate for the 3214 head offered.

Prices and numbers reported are as at 2pm, Friday 26 February.