THE Eastern Young Cattle Indicator yesterday closed for 2016 at 634.5c.kg, almost 50c/kg higher than where it closed a year before.

It’s fair to say that not many of us saw that coming 12 months ago, judging by the results of our 2016 EYCI reader competition.

Back in January we asked Beef Central readers to nominate where they thought the EYCI would close at the end of 2016. At the time the EYCI stood at 587c/kg, close to the then record-high of 597.5c/kg, which had been reached just a few weeks earlier in December 2015. 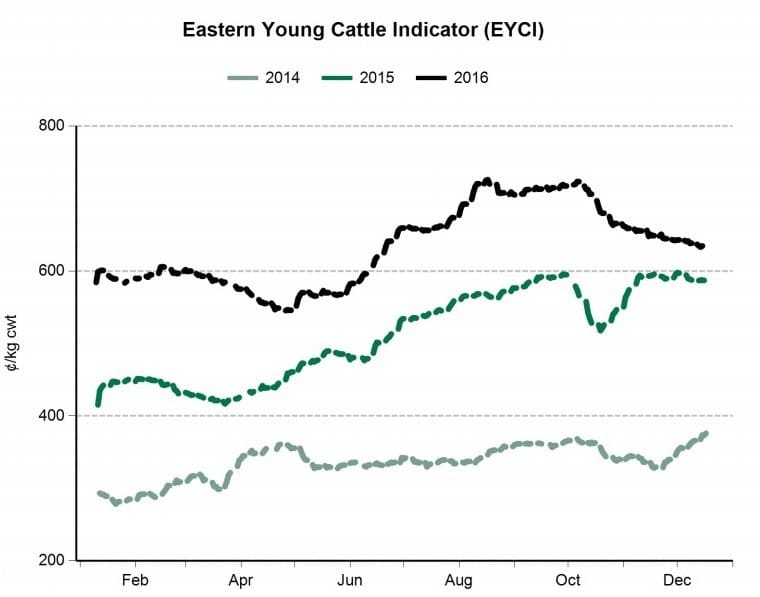 Drought conditions were dominating across Australia at the time and signs of softening demand in our biggest export market, the US, were clearly evident.

Perhaps it is little wonder, then, that three quarters of our respondents expected the EYCI to finish lower in 2016 than it had in 2015.

The average of all guesses was 549c/kg – 85.5ckg below where the EYCI ultimately finished the year yesterday.

Impressively, a handful of readers came within a cent or two of predicting the actual result – not a bad effort, a full year in advance (more on who our soothsayers were below)

The sheer range of answers received underlines just how difficult it is to confidently predict market trends 12 months out.

However, it is also clear that many of those who came close did so on the back of logical and considered judgement, offering the reasons why they arrived at their predictions.

So, who should you be seeking-out to to get the jump on where prices will move in the next 12 months?

Our competition results suggest you could do a lot worse than talk to these guys: 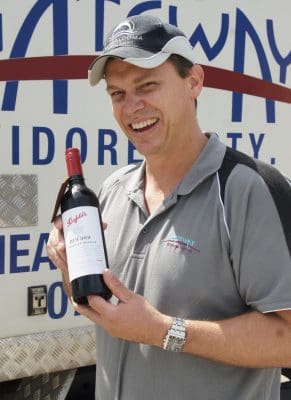 Nathan is business development manager with Gateway Providors, a large Brisbane-based wholesaler and food service supply company with branches from Townsville to the Gold Coast.

So as a meat trader and providore, why his interest in the cattle market, and the EYCI in particular?

“Livestock price movements have a direct bearing on what we’re likely to have to pay for boxed beef, so we watch it closely,” he said this morning, while receiving his winner’s prize – a bottle of coveted Penfolds Bin 389 – the ‘Poor Man’s Grange’.

“Like everybody, we’ve seen a big lift in beef procurement cost over the past year or so. It’s risen by about 30 percent. But despite cattle prices now starting to ease, it’s still too early to see any relief in wholesale prices. We’re hopeful that might change early next year,” Nathan said.

Around the time Beef Central’s call went out 12 months ago for entries in our ‘guess the EYCI at the end of 2016 ’ competition, Gateway Providores was doing its own ‘crystal ball gazing’ for beef supply contracts with some major institutional customers.

“I remember it was still dry at the time, but the other factor of concern was the Aussie dollar. While the currency does not impact directly on our business, it has an indirect effect, because domestic customers for beef, like us, ultimately have to compete with export customers for the same product.”

“These days, domestic users are competing much more directly with the export market,” he said.

Other entrants deserving a pat on the back:

(Simon’s reasoning at the time: “Why? China likely to slow further, causing the $A to depreciate against the US between 10-20%, trading below 60c in 2016. China’s currency will likely depreciate against the US however not as much as the $A. Chinese middle to wealthy class will continue to change spending from luxury goods to luxury food, with Australian produce at the head of the shopping list, particularly as they set a new record for tourism visits to Australia in 2016.)

It’s worth noting that Simon also predicted St George to win the NRL, NSW to win State of Origin, and that Essendon would NOT win the AFL flag. Our tip: Stick to predicting the EYCI Simon!)

(Andrew’s reasoning at the time: “Processors will have to continue to pay realistic prices to compete with restockers and live exporters for a diminishing supply of cattle over the next 12 months.”

(Barry’s reasoning at the time: “The market still has room to move upwards, subject to weather and restocker demand”).

(Greg’s reasoning at the time: “Over the last six months there has been a general trend relationship between the US exchange rate and the EYCI.  If central bank actions massage the Aussie dollar to 67 cents US by January 2017, then that could translate to an EYCI of 620c/kg.) 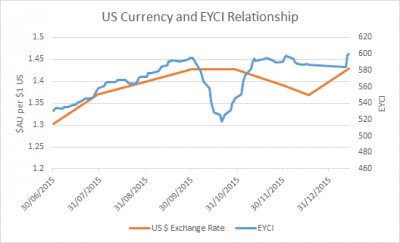 Think you can do better? We will run the same competition for 2017. Tell us below where you think the EYCI will close in late December next year, and, for extra points, tell us why, either in the comment box below, on the Beef Central Facebook page, or email your entry to admin@beefcentral.com

Next year’s winner, like Nathan, will receive a bottle of Penfolds Bin 389. “It’s like angels dancing on your tongue,” was keen wine fancier, Harry Tancred’s description of the legendary drop.