A selection of the Panshanger Estate cows sold to Paraway Pastoral Company. 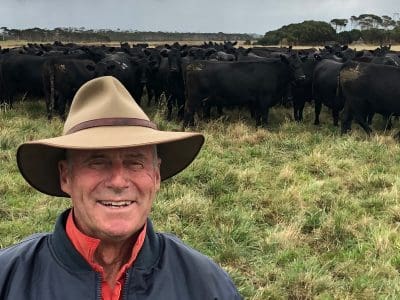 Launceston-based stock agent Ian Richards of Ian Richards Livestock said the deal was completed within a matter of days once the vendor, George Mills (left), had issued instructions the sale was to be completed and the cattle gone before the Tasmanian lockdown was implemented by state authorities.

“It took a little while to at first get our heads around what was required,” Mr Richards said.

“We tried many of the previous buyers but none were in a position to take the lot as one.

“At the time the cows were yet to be classed and weighed in the usual AuctionsPlus manner.”

Mr Richards said that luckily, they made contact through a family member of the manager of the herd who knew of its long association with the Lawsons bloodlines and its production performance, and the buyer Paraway Pastoral Company was in a position to take the cattle in a single lift.

Panshanger principal George Mills said the cancellation of this year’s AuctionsPlus sale was unfortunate, but a decision had to be made in the best interests of everyone.

“It was a regrettable to cancel the AuctionsPlus sale as we’ve had great success over the years using it to disperse the Lawsons blood genetics to other breeders,” Mr Mills said.

“It meant many of our previous buyers wouldn’t have the opportunity to buy the cattle.

“We also didn’t want to be seen as being responsible for the potential spread of the virus when the authorities were advising avoiding close human to human contact.”

An avid flyer and an experienced private pilot, Mr Mills said it became clear that things were getting worse, not better, on the COVID-19 front on his return from Lawson’s annual bull sale.

He said the Lawson’s sale was conducted on strict social distancing rules and when he returned that evening from the sale Tasmanian airports were to close at 9pm, including all private airstrips.

“We could see then we had to do things differently including cancelling the sale,” he said.

“We weren’t prepared to endanger the health of our staff, the staff of people assessing the cattle, those engaged to make their delivery including buyers who wished to view the cattle.”

Mr Mills said the delivery of the cattle to the mainland and Flinders Island was also likely to be affected through the normal shipping channels.

When the decision was made to sell privately, they concluded it had to be either one buyer taking the lot or the alternative was to sell them to the local meatworks. That’s how seriously they viewed the risks.

“We wanted dearly to give our previous buyers the opportunity but when the virus issues began to escalate, we considered the best solution for everyone, own staff, the agency staff and the broader community was to accept one single offer.”

Mr Mills said when the buyer confirmed they would take the cattle they were sold on the Monday (without an on-farm or independent assessment) and trucked on the Thursday, reaching their destination on the Saturday, following a total journey of 1750 kilometres by ship and road.

“It was unfortunate and regrettable the virus issue forced our hand in the manner it did,” Mr Mills said.

“We couldn’t hold the cattle for an extended period of time due to the large number of heifers we bring into the breeding herd and calve down each year.

“The saving grace is the cattle have been saved from the meatworks and the investment in the Lawsons genetics has not been wasted and lost to the industry.”

Mr Mills stressed that once Tasmania and Australia becomes “virus-free”, future sales of the Panshanger cattle would be returned to the AuctionsPlus platform.

The buyer of the Panshanger Lawson-blood cows was Macquarie Group’s Paraway Pastoral Company for its 11,3030 hectare Burindi Station in the hills of the New England region near Barraba, NSW.

A spokesperson for Paraway said the 240 pregnancy-tested-in-calf cows purchased from Panshanger had travelled the long distance well from Smithton in Tasmania.

“They arrived in good condition and we’re really happy with genetic improvement they will offer our entire operation going forward,” the spokesperson said.

“Burindi has a pure Angus breeding herd that focuses on recognised bloodlines within the Angus breed.

“They are definitely long-term keepers and their female progeny will also become part of our future breeding program.”

The spokesperson said the season throughout its northern NSW cattle operation was one of the better Autumn breaks in Paraway’s short history.

Commenting on the transaction the spokesperson said where it suited both parties Paraway was more than comfortable dealing direct by negotiation on sales of larger lines.

However, he declined to divulge the price paid for the Panshanger cows or the cost for the freight.