Competing for a quality 1818 head Angus mixed sex weaner penning at NVLX Barnawartha, the strong online inquiry claimed a sold 46.7 percent of the total yarding and an amazing 60% of the heifer offering.

Additional at-the-rail interstate competition also added vital substance to the overall northern demand that trucked an estimated 70 percent of all sales to northern NSW with some lots also bound for southern Qld.

The market for steers was solid through all categories. 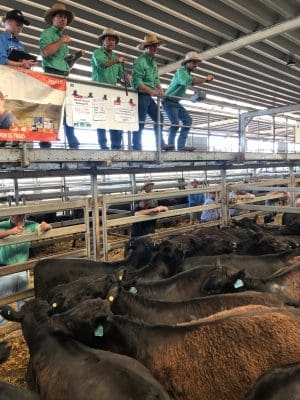 Paull & Scollard-Nutrien auctioneer, Luke Deimel quoted sales as being 20c/kg stronger than the duo-agent’s previous early-December market, and on par to his company’s most recent late-December Myrtleford sale.

A lot of the cattle offered in those two previous penning Mr Deimel said were breeders’ lines normally retained in their January penning.

“The northern demand was certain more aggressive and much more dominant than we have previously experienced” Mr Shea said.

Watch the opening lane of sales:

Purchased as “baby” four-to-five-month-old calves at a cost of $600, this yard of 18 was offered by G. Tallent of Burrumbuttock, while vendor Boggy Creek also sold yards of Angus grown steers – 19 weighed at 466kg and a further yard of nine, weighed at 436kg, sold for $2040.

The top priced yard of genuine-aged Autumn-drop weaners made $1980 a head.

Weighed at 460kg, this pen of 16, was offered by AM Wallace, Porepunkah while P&A Caponecchia, Bobinawarrah, sold the tops of their draft – a yard of 7, 469kg at the same money. The demand for heifers was full of substance with the online competition holding sway over local operators also eager to put young females back into the paddock.

At the heaviest end of the heifer yarding – where pens exceeded 360kg- most lots made 410-415c/kg. But, as the weights declined and the competition intensified a price regime of 450 to 485c/kg became common, with half-a-dozen or more pens breaking the $5/kg barrier.

A number of other vendors also scored top-end-sales to exceed $1600.

Overall, the Elders and Paull & Scollard-Nutrien assembled yarding, which grossed $3.03m, drew the attention of 228 online viewers with $756,000 spent by 34 active buyers.