With another large offering of lighter steers, the 200-280kg liveweight category gained 13c/kg this week, averaging 648c/kg for the 2355 head offered, with a 98pc clearance for the week. Lower numbers failed to halt a $111 decline in the PTIC categories this week, with PTIC cows down 26c/kg on average, to 449c, and PTIC heifers back 10c to 550c/kg. Since the rebuilding emphasis took over the market, the weekly movement in this category has been much closer aligned to the bloodlines and target marketing on a week-to-week basis, as opposed to overall supplies. STOCKLIVE buyers pounced on quality lines across both Prime Sales and big-ticket Store Sales, during a busy week of online bidding that commenced with more than 70 head secured via the platform at the Inverell Regional Livestock Exchange (IRLX) Prime Sale on Tuesday.

The auction processed 763 head of cattle, which were drawn from Glen Innes, Inverell, Guyra, Warialda, Bingara, Bundarra, and Southern Queensland, and the steer price peaked at 712.2c/kg for a 170kg GJ and PG Doak Angus pen.

Online sale highlights included a pen of Charolais cross steers, bought for 492c/kg and a Santa Gertrudis line snapped up for 433c/kg.

In the heifer category, a pen of 10 Brahman cross cattle was secured for 466c/kg and the same buyer also purchased an Angus cross line for 430c/kg.

The cow and calf market was firm, and Herford line was knocked down to a StockLive buyer for $1375/unit.

Then later in the week, at the Hunter Regional Livestock Exchange (HRLX) Prime Sale on Wednesday, online purchasers again turned their attention to female lines, with an Angus pen snapped up for 630c/kg.

In total, StockLive buyers at this auction secured more than 11 per cent of pens offered.

During the sale, a feature line of 215 Hereford steers, offered by Reid Trust, Howlong, “Chudleigh”, was a sale highlight, with a 418kg pen reaching $2330/head.

Gerard Unthank, Brian Unthank Rural, wasn’t surprised by the outstanding sale result, given the reputation for high performance on grass and grain held by Herefords from Reid Trust.

“We knew there would be competition from both restockers and lotfeeders, but on the day the grass market proved stronger and the restockers came out on top,” he said.

“It was one of those sales where everything aligned and it was strong across the board,” Mr Unthank said.

Later in the week, on Friday, online buyers at the monthly South-West Victorian Livestock Exchange Store Sale gravitated to restocking lines, with one buyer securing a European cross cow and calf pen for $3000/unit which made for a clear sale highlight.

The second-calvers, offered by KR and MP Smith, had three to four-month-old calves afoot.

A 135kg Friesian pen was also secured for 510c/kg by an online buyer during the Store auction. 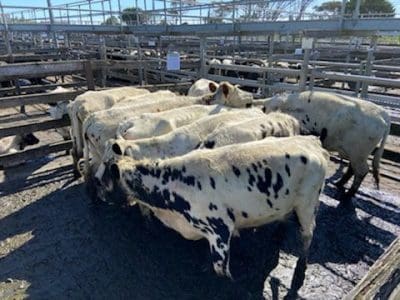