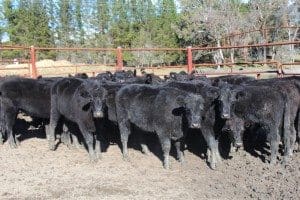 Top price among heavy feeders in Friday’s AuctionsPlus sale at 337c/kg was paid for this line of 28 Angus steers, 405kg, Bonny Brooke blood from Walcha.

Widespread follow-up rain falling across the eastern states as far north as southern Queensland  provided welcome relief for producers, providing the opportunity to hold on to stock to see what unfolds over the  next couple of months.

Cattle numbers listed decreased to 5411 head last week, although the decline was less severe than what was seen in physical cattle selling centres. Sheep numbers also declined in response to the rain.

With the lower numbers came strong prices with Angus feeder steers, 405kg from Walcha making an impressive 337c/kg or $1365 a head.