GRASS fever has set-in across the Queensland and northern NSW store cattle market, as the full impact of the recent – and continuing – rain event starts to take hold.

Albeit on limited sale offerings due to paddock access issues, Queensland store cattle sales at Roma on Tuesday and Dalby yesterday lit-up as early-responders reacted to the recent welcome moisture.

Dalby agents reported an unusually large crowd at yesterday’s sale – some apparently bored by not being able to get onto paddocks to work, while others were keen to gauge sentiment in the restocker market. Better light steers at Dalby also made their 350-400c yesterday. See today’s separate Dalby sale report.

It’s still early times to be gauging the market impact from the recent ‘game-changing’ rain, but already markets have reacted sharply.

The Eastern Young Cattle Indicator has been on a near vertical trajectory since rain started a fortnight or so ago, rising a spectacular 42/kg in 14 days since March 21. It closed at 562c/kg (carcase weight equivalent) yesterday – just short of its 2018 high. At a mean dressing percentage of 54pc, yesterday’s EYCI figure equates to a liveweight equivalent price of 303.5c/kg.

The EYCI has now recovered all the ground it lost due to hot dry conditions in January February.

MLA chief analyst Scott Tolmie said the recent jump in the EYCI was the sharpest seen since March-April last year, also after a significant rain event.

“It’s going to put a lot of strength back into the store market,” he said.

“What will be interesting will be the price relativities between lighter young cattle and finished meatworks cattle. Producers now looking at solid grass growth in coming months will be doing a lot of sums on what they can afford to pay for restocker cattle, depending on their level of confidence in the slaughter market later in the year,” he said.

“But it’s hard not to imagine producers with feed jumping back into the market – or if they already have them (grower cattle) they’ll be holding onto them to maximise the weightgain benefit.”

It was still too early to tell whether the young cattle market would run the risk of becoming ‘overheated’, relative to meatworks cattle prices.

The pendulum could also start to swing back to grass-finishers again, as they get the upper-hand over lotfeeders in securing grower cattle.

“It will be interesting to see whether number on feed decline, due to the competitive pressure for those feeder type cattle from grass finishers – especially given the modest profitability on grainfed cattle at present due to high grain prices,” he said.

While there was much rejoicing in areas that received the best of the recent rain, some pockets in northwestern NSW (around Dubbo, for example), and western Queensland remain dry.

“Obviously the start of March has been great for many, but the BOM outlook for the next three months remains quite dry. As much as we are all very happy with the conditions today, there’s still some uncertainty through to mid-year.”

Mr Tolmie said the timing of turnoff for slaughter cattle was another interesting outcome from the recent rain.

“For people holding onto existing stock to add weight, it might tighten slaughter supply for the next couple of months,” he said. “But winter supply, which previously looked like being very tight, could not be a bit more plentiful for processors, as a result.” 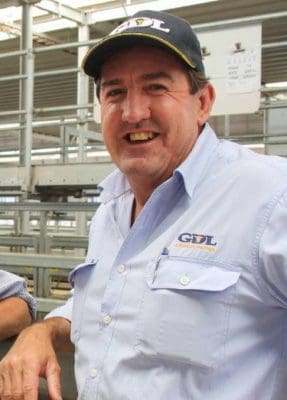 Veteran Dalby stock agent Peter Daniel, from GDL, said the Roma market on Tuesday reacted very positively to the rain, lifting 20c/kg and better in places for young cattle. Some of the western cattle in the yards were already on the move before the rain fell.

“It’s been great rain, but people looking to buy back in just need to be careful,” Mr Daniel suggested.

“There might be a sharp rise in the store market for young cattle, but I just can’t see it in the slaughter market, and the feeder steer market is under enormous pressure, due to grain costs,” he said.

“All of a sudden, the yearling grassfed bullock price is in front of the feeder steer market – which we haven’t seen in ages. For the producer who’s been selling feeder steers at 280-285c, they don’t like having to get back in at 350c or better for a replacement.”

That implies that more cattle moving into winter could head onto grass or oats programs to add weight, rather than finding their way into a feedlot.

The upcoming weaner sales circuit in northern NSW and southern Queensland would provide some good guidance about where the restocker market would go, post-rain.

Weaner sales will start next week and slowly move north, finishing with some of the showecase weaner sales in Roma in early July. Sales in centres like Inverell, Tenterfield and Casino would kick-off next week, moving through the New England before heading north into Queensland in May and June.

“Much of the country where the weaners will be drawn from has had good rain, so they will have some weight in them this year,” Mr Daniel said.

“But if there’s going to be a heap of weaners fronting up around 300kg, expecting to see 400c/kg, I can’t see it happening. Whilever the A$ stays high, and there is so much meat on offer in other parts of the world, its putting a handbrake on meat value. There might be a bit of wet weather money around from processors at present, but that may not continue. They still have to sell the beef into what are now highly competitive international markets.”

Breeders may be safer option

For replacement breeding cattle, Mr Daniel said he thought prices could improve $200 a head, in the back of the most recent weather change.

“People keen to restock may see that as the safest option,” he said.

“Rather than buying a $1000 weaner and trying to turn him into a $1400 sale item, they may be better off going back into something a little bit safer – whether it be cows and calves or PTIC heifers. Banks and financiers themselves might have a bit of say in that,” he said.

In North Queensland, where torrential rain has fallen in the Townsville/Charters Towers area, prices for live export steers have lifted 20c/kg in the past week. Offers seen yesterday were around 260-270c, delivered port. Three boats are scheduled to load out of Townsville during March, but some could struggle to source cattle given local road and paddock conditions.

A local North Queensland stock agent remarked on the ‘unbelievable’ number of northern and western cattle, mostly breeders, that had gone onto the market during January/February, due to hot, dry conditions.

“Many saw the end of January as the decision-making point, as conditions deteriorated,” the agent said. “Some of those people, who have now had a lot of rain, will now have to try to buy back in, at higher rates.”

Charters Towers cancelled cattle sales last week and again this week, due to the conditions.

BOM issued another weather warning yesterday, as the northern monsoon entering a more active phase in the wake of significant to extreme rainfall and flooding in Townsville and inland areas associated with a tropical low.

While the rain was now easing in Queensland’s northwest, many catchments remained wet and vulnerable to further heavy rainfall, particularly in the far north.

Widespread flooding is being seen in a number of large inland Queensland rivers, and these are expected to remain in flood warnings for days and even weeks as flood waters move through the systems.

The focus for the heaviest falls has now shifted back to the North Queensland coast where a flood watch was issued yesterday for coastal catchments from Ingham to Cairns, and extending as far north as Cooktown.

New flood warnings were issued yesterday for the Tully, Murray and Upper Herbert Rivers following heavy rainfall overnight with a 24-hour peak of 313mm recorded at Davidson Creek near Tully.

Further widespread falls are expected in the 100 to 200mm range, with isolated heavier falls possible.

The Bureau is currently monitoring two tropical lows in the Gulf, and there is an increased chance of one developing into a tropical cyclone over the weekend.