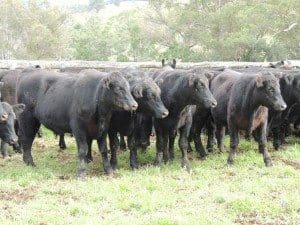 Typical was this line of 27, 15-16 month old Angus steers at Walcha, Hazeldean and Bonny Brook blood, averaging 388kg that made 323c/kg to return $1255 when bought by a feedlot buyer.

For the first time in many weeks steer rates behaved along more conventional lines, with lighter and younger cattle again attracting c/kg premiums – however the differential between the lightest and heaviest class was only 27c.

Heavy steers made 241-323c to average 276c, up 13c, and saw some of the standout prices of the day including the Walcha Angus steers mentioned above, as well as a line of Charolais, Shorthorn and Droughtmaster cross steers, 8-16 months, averaging 368kg at Muttaburra selling for $985 or 268c.

Cows with calves at foot in Friday’s sale were primarily mixed-age lines out of Queensland, selling from $830 to $1230, and in WA a line of five year old Hereford cows with Angus calves at foot sold for $1805. Heifers PTIC for their first calf were sought-after in Friday’s sale, making from $1025 to $1300 for Wattletop-blood Angus heifers in calf to Wagyu bulls at Condobolin.