Two big lines of Queensland-bred one-brand weaners totalling about 2800 head will provide an acid test for the young cattle market across eastern Australia when they are offered at the weekly Roma store sale tomorrow.

Up til this week’s blast of cold weather, at least, there’s been a general strengthening in the weaner market, especially for black and EU-eligible cattle. Southern restocker buyers have been paying 210-240c/kg recently for better quality lines, while the Queensland market has been around 195-210c for the same cattle. 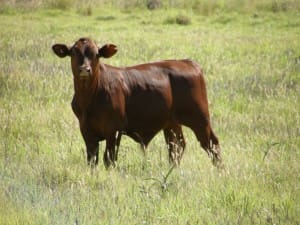 Kindee weaners like this will be part of a line of 2000 steers and heifers at Roma tomorrow, account the Murray family

It’s rare, if not unique these days to see such a large line of one-brand young cattle pass through the Roma yards, especially on any sort of regular annual basis.

The draft represents the Murray’s entire annual weaner turnoff, except for retained heifer replacements and a smaller number of out-of-spec late weaners which will be sold separately in December.

The Kindee catalogue includes +1000 steers and 800 weaner heifers, plus for the first time this year, a further 120 PTIC heifers, mated to Shorthorn bulls.

In a second big one-line consignment at Roma tomorrow, the Kindee draft will be joined by a further 800 well-bred Black Angus weaner steer steers and heifers from John and Julie Shaw, Double J, Injune. The Shaw’s also follow the strategy of selling their entire weaner draft in a line each year, aiming to showcase their quality and genetic potential to perform.

The Kindee cattle are Shorthorn x Charolais x Santa Gertrudis cross, carrying some of the best genetics in the country, including Weebollabolla, Palgrove and Yarrawonga Waco bloodlines. The Murray family has bought bull replacements at Yarrawonga for 50 years. The sale weaners are off their mothers aged 8-10 months, weighing 280-320kg liveweight. They will be sold in lots of 25-35 head, through agent, Watkins and Co’s Brad Nevin.

The well-grown Kindee cattle come off two Murray family breeding properties, both brigalow/belah scrub country at Cowangah at Taroom, and Muya, near Injune.

In combination, the Double J and Kindee offerings will represent the outstanding large run of flatback weaners to be offered at Roma this year.

If past history is anything to go by, both mobs will go to southern Darling Downs and northern/central NSW backgrounders, on oats or lucerne, or perhaps onto grass.

Seasons will dictate where the buying strength comes from this year, with some oats crops in southern Queensland now looking for a drink. A larger portion than normal might head into NSW this year, given the seasonal fortunes, and the fact that similar weaners are currently much more expensive further south, than they are in Queensland.

The Murray family is hoping to average better than 200c/kg for their steer portion this year, and in the 190s for the heifers.

Beef Central will follow the fortunes of the Kindee and Double J Roma drafts later this week.