Ballarat gives back a little for Christmas DEMAND was selective and softened slightly at the final store cattle market for 2021 at Ballarat on Friday when a full penning of 3870 head met a reduced buying group that lacked depth and intensity.

With this in play the market for heavy grown steers opened as much as $100 a head lower than the centre’s November rates, before gathering pace on the more suitable feeder and younger lines.

From there demand became inconsistent with some selected lots trading at fully firm rates, with others considerably off-the-pace. Overall the steer market averaged $60-80/head less.

Elders auctioneer, Graeme Nicholson, said that apart from the softer start to the heavy grown steer and heifer markets, there wasn’t much change otherwise.

He said selected large lines of well-bred feeders and weaners were priced firm and possibly higher in places, but demand was also inconsistent, to lack previous depth.

Xavier Shanahan, Nutrien, agreed that some heavy steer lots early in the sale didn’t make the same money as last month, and the general standard of the feeder and weaners was also not a match.

“But let’s not be too disappointed,” Mr Shanahan said.

“It was still an excellent result. How could you not be happy as these prices?”

In a post-sale interview with Beef Central, HF Richardson auctioneer James Haddrick agreed there were buying opportunities early on and later through the sale.

“Some of it (the market) saw no change and in other parts it was softer, without the punch of last sale.”

Drafts of Hereford and other coloured cattle were more populated than usual in the December. 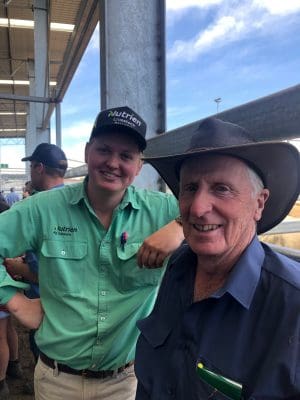 Vin Richards, Blampied, sold his family’s annual draft of Angus weaners with Nutrien young gun Ned Balharrie, who is the generation of the Balharrie agent family to hold the Richard account.

The selling of weaners was led by Brad Mason and family, trading as Stonehill Partners, Mt Beckworth.

The selling of store cattle at CVLX Ballarat will resume in February with a sale each and every Friday during the month.